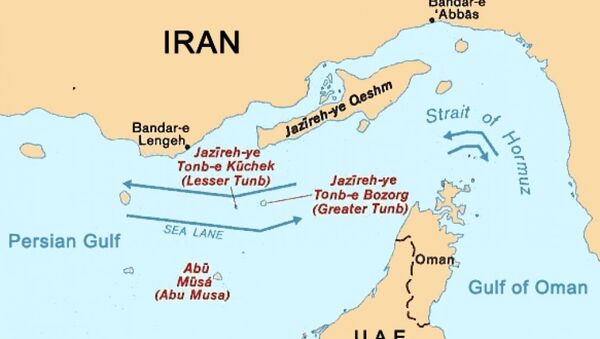 "We are concerned over these threats and [are] always trying to prevent tensions in our region," Jarallah said on Sunday, as quoted by the KUNA news agency.

Last week, the head of the Revolutionary Guard Corps Navy Force, Alireza Tangsiri, said that Iran would close the Strait of Hormuz- if the country was unable to use it, according to Fars News Agency.

The statement came amid growing tensions between Tehran and Washington, as earlier in April, the US blacklisted Iran's Islamic Revolutionary Guard Corps (IRGC) as a terrorist organisation, while the Islamic Republic retaliated by officially designating the US Central Command (CENTCOM) as terrorists.

US Must Talk to Revolutionary Guards if It Wants to Enter Hormuz Strait - Zarif
The Strait of Hormuz, a narrow stretch of water between the Persian Gulf and Gulf of Oman, is considered one of the world's most important choke points for world oil trade. More than 18 million barrels of oil pass through the narrow waterway each day, accounting for 30 percent of the world's oil shipments by sea, according to the US Energy Information Administration.

The Iranian oil trade was hit by last May's decision by US President Donald Trump to withdraw from the Iran nuclear deal, triggering  the reinstatement of the country's Iran sanctions.

Two rounds of sanctions have been put into effect since then, including large-scale restrictions on exports of Iranian oil.

The United States wants all countries to eventually cut their imports of Iranian oil to zero, which will likely have a significant impact on the country, where oil exports serve as one of the main sources of revenue.