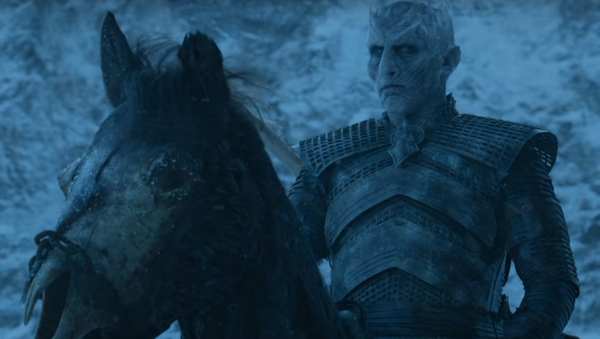 Even before the eighth season premiered, Game of Thrones fans knew that for the living fighting against the army of the dead, the night would be dark and full of terrors – but they definitely couldn’t expect that arguably the biggest and the most important battle in Westeros would end the way it ended.

The third episode of Game of Thrones’ eighth season, “The Long Night”, has delivered the Mother of All Battles: the living of Westeros desperately tried to fend off the White Walkers and their warlord, the Night King, to defend the House of Starks in Winterfell.

From the very beginning, fans knew that the show’s producers would be ruthless, and there would be a lot of death, but no one could have expected that Arya Stark would kill… the Night King – probably, Bran Stark and red priestess Melisandre were the only people who could foresee him turning into ice chips.

Viral
Westeros Coup? Ex-CIA Deputy Director Breaks Twitter With Game of Thrones Cameo
The living tried to lure the Night King into a trap and used Bran, a.k.a the Three-Eyed Raven, as bait, and the plan worked perfectly for Winterfell residents, who truly thought they just wouldn’t be able to kill the relentlessly growing army of the dead.

As Theon Greyjoy fell while defending Bran, the Night King approached him with the intent to kill and finally achieve his goal – the Long Night, but he was taken by surprise when Arya jumped onto him and stabbed him with the Valyrian steel dagger. Once he was eliminated, all White Walkers, wights and even his ice dragon met their demise.

The Battle of Winterfell didn’t play out exactly as anticipated and now social media users are wondering what to expect from the fourth episode.

HBO has dropped a new teaser for Episode 4, in which Daenerys says, “We have won the great war. Now, we will win the last war”, in an apparent reference to the battle against Cersei in King’s Landing for the Iron Throne.

Given Arya’s role as Westeros’ redeemer, many anticipate her fulfilling Melisandre’s prophecy, which suggested that she would “shut brown, blue and green eyes”. So, Arya, who has already killed brown-eyed Walder Frey and blue-eyed Night King, might get back to her to-kill list to assassinate Cersei, who has green eyes.

Now we know Arya is the real 🐐 of GOT and not Jon.
Something is telling me that will die just after killing Cersei, but I seriously hope not… #GameofThrones pic.twitter.com/gfn84Nduct

Cersei: I have an army.

#GameofThrones Arya Stark crossing the Night King of her list so she can focus on people like Cersei Lannister: pic.twitter.com/fWTbBO8OGr

Some imagined Cersei’s reaction when she finds out that Arya, the faceless assassin, defeated the Night King:

When Cersei hears that the Night King didn't kill her enemies for her, instead Arya killed the Night King #GameOfThrones #BattleOfWinterfell #GOT pic.twitter.com/cAH7jbM3Wm

Cersei fleeing Kings landing the second she gets word that Arya defeated the night king:#gameofthrones pic.twitter.com/Jdjs66neW4

Cersei right now knowing that Arya is coming for her next #GameOfThrones pic.twitter.com/1z3wQMYWxB

When cersei know arya is caming for the green eyes #GameofThrones pic.twitter.com/GXair4MIma

As expected, the Battle of Winterfell was bloody and insanely intense, and, unfortunately, not everyone made it out alive, including fans’ favourites:

The fourth episode will air next week, and there are only 3 more episodes left before the record-smashing series comes to an end: now that the Night King is, hopefully, gone for good, it’s safe to say that Westeros is about to see the final big war for the Iron Throne. And it could be every bit as legendary as the Battle of Winterfell.