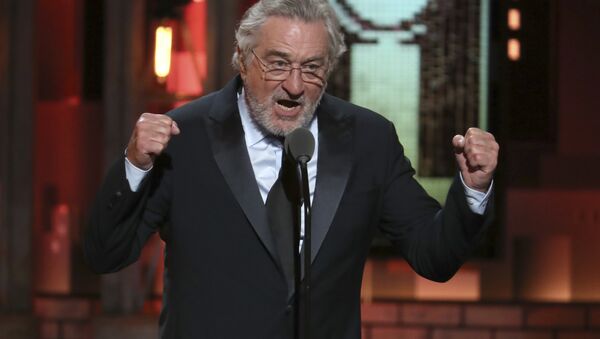 © AP Photo / Michael Zorn/Invision
Subscribe
International
India
Africa
The Academy Award-winning actor once again engaged in an angry diatribe against President Trump during a brief appearance Friday at the Not the White House Correspondents’ Dinner in Washington, DC.

De Niro, 75, who has been a prominent critic of Trump since his inauguration, told CNN that Trump's time as the US president will become “one of those things” people will look back on and recall with the words “Remember all that stuff, how terrible it was?”

De Niro told the audience on Friday that he stood with host Samantha Bee to support the First Amendment, and “the right of the president to be a relentless and unrepentant, lying scumbag, the right of his supporters to not give a shit, and our right to do something about it". De Niro also added that it’s his “civic duty” to call out the president.

This is not the first time the Hollywood actor has strongly criticised the US president. Earlier in January, De Niro compared Trump to Adolf Hitler, claiming that like Trump, people thought dictators in the past "looked funny" when they first came to power. Asked whether Trump was a fascist, he said: “I guess that's what it leads to. If he had his way, we'd wind up in a very bad state in this country".