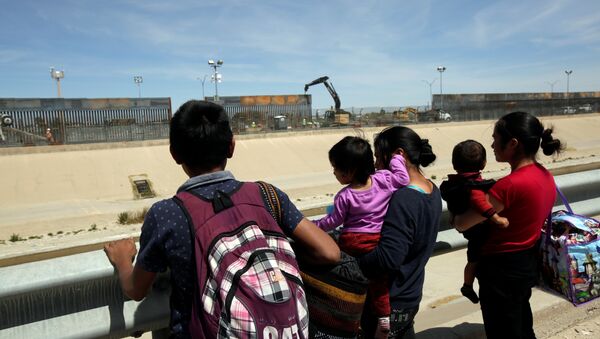 Despite Mexico's efforts to curb the movement of organised caravans, migrants still keep coming to the US border from Latin America, reportedly stretching the resources of the US border control service to the breaking point. US CBP Commissioner Kevin McAleenan has already called it "an unprecedented humanitarian and border security crisis”.

According to US Customs and Border Protection (CBP), radio advertisements in Central America are said to be encouraging would-be immigrants to cross the US border, Fox Business reported citing Assistant Chief Patrol Jose Martinez.

"You listen to your radio on the way to work, on your way to the grocery store and that country is advertising, 'If you want the American dream, we'll help you out, we'll teach you how to get in the United States’”, Martinez said during their trip along the southern border in El Paso.

He assumed that the station in this Texas city might be "probably the busiest area in the country at the moment with illegal entries”. The assistant chief patrol revealed that the starting point of most newcomers, seeking the promised “American dream”, is Cuba, Nicaragua or the so-called "Northern Triangle" of the three Central American nations, Guatemala, Honduras, and El Salvador.

An increasing number of migrants have been arriving at the US border from Central America in recent months despite Mexico’s efforts to curb the organised caravans. Mexican Interior Minister Olga Sanchez Cordero has said if the current migration flow remains unchanged, the number of migrants trying to get through Mexico to the United States will reach 900,000 people by the end of 2019.

During what US CBP Commissioner Kevin McAleenan called "an unprecedented humanitarian and border security crisis” El Paso was reportedly hit hardest. Its security services have reportedly detained more than 71,000 illegal immigrants over the past six months, which is almost seven times as many as during the same period a year ago.

US CBP has had to resort to erecting an entire tent city to house those who crossed the border illegally en masse, The Guardian reported. The officials are speaking about the humanitarian and border security crisis on the US south-west border stretching their “resources and processing facilities to the breaking point”.

In a recent interview, US President Donald Trump condemned the numbers of illegal immigrants crossing the US-Mexico border saying that there are “10 times more people coming up with their families” and comparing the situation to Disneyland for intruders. Earlier in April, the commander-in-chief said that he will need to deploy more US troops to the southern border to deal with illegal border crossings.