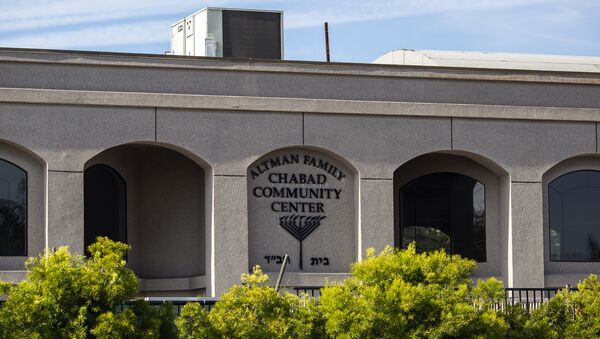 A 19-year-old man opened fire on Saturday at a synagogue during a Passover service in the California city of Poway, with the attack leaving one dead and several injured. Rabbi Abraham Cooper, Director of Global Social Action Agenda of the Simon Wiesenthal Centre, and hate prevention expert Andre Oboler have given their take on the incident.

“It is clear that it is a copycat of both the Pittsburgh and the New Zealand attacks: the Pittsburgh massacre in which the shooter used social media to speak with others and to blame the Jewish community for immigration issues when he shot Jews”, Rabbi Cooper from a leading Jewish human rights organisation commented to Sputnik, stressing that the Australian extremist in New Zealand used the same “logic” when he targeted Muslims.

“And in this case a 19-year-old American with no previous criminal record invoked the same logic to blame Jews for bringing Muslims to the United States. This is all supercharged in the sense, and I might almost say was dictated by social media which is having a greater and greater impact in terms of supercharging hate and encouraging lone wolves of all kinds of orientation and ideologies to act out in a very violent way”, the Rabbi went on.

He also commented on the synagogue’s rabbi, whose name is Rabbi Goldstein, who “according to all reports, was quite courageous and continued his sermon, he tried to calm everyone down”.

“There was an armed off-duty policeman who was apparently in the prayer area, and his presence helped and apparently there may have been a bit of malfunction on the part of the shooter who had an automatic weapon, who could have done even more catastrophic harm”, Rabbi Cooper said because there were apparently about a hundred people standing in prayer at the time of the attack.

“The Passover prayer on the eighth day also has a special prayer for the dead and a prayer for the victims of the Holocaust. So, it’s also quite an emotional day, and also Holocaust Memorial Day is coming up later this week”, Cooper continued, adding that the issue is “extremely disconcerting”.

The rabbi went on to enumerate the possible, as he sees it, solutions to effectively eradicate hate crimes:

“I think if we are going to defeat hate not only in the US but around the world, we need to build new coalitions, we need a much more active involvement of the social media companies, including by the way the Russian vk.com which becomes quite popular with extremists, and also including Islamists”.

The commentator expressed concern over the “weaponisation of hate crimes and hate-related issues including anti-Semitism”.

According to James Hawdon, Professor of Sociology and Director of the Center for Peace Studies and Violence Prevention at Virginia Tech, "First, we have to recognize that, despite the apparent increase recently, hate and extremism are hardly new.  These ideas have always been with us and likely always will. What may be new is the speed with which they can be disseminated due to the Internet and social media, and what some have argued as a normalization of hate."

“This kind of issue for decades would have been bipartisan, but with the toxic situation in Washington, it’s really not helped the situation at all”, the rabbi noted, going on to further address the security issue:

“While Americans of all faiths revere our freedom to congregate and freedom of religion we’re going to have to find a way in our society here not to reduce houses of worship to armed camps in order to allow people to pray”.

Cooper drew special attention to not only enlightenment on the issue, but also on the critical importance of involving social networks to a greater extent into counter hate crime operations:

He is certain that otherwise, “we are going to see many many more copycat attacks all over the world”.

“If it just takes a person with a camera and they can broadcast their crime live, that will spawn more and more attacks on different kinds of targets. That is something that can be changed and must be changed”, Cooper stressed, going on to ponder ways for law enforcement to flag potential attacks at the stage of social media planning:

“Unless you are monitoring every single social media message it is difficult to top the attack, but it is a signal to US law enforcement that within the rule of law, they are going to have to start paying as much attention to the chatter of domestic extremists as they do for the ISIS and other types of Islamists and international terrorists”.

The point of view was essentially echoed by another commentator, Dr Andre Oboler, CEO of the Online Hate Prevention Institute, social media and online public diplomacy expert and a Senior Lecturer at La Trobe University.

As Oboler sees it, the internet is not infrequently a source of hatred and misinformation:

“After the Sri Lanka attacks social means were blocked by the government to prevent misinformation spreading. That's not the best solution as social media can also help a family check in with loved ones during a crisis,” he told Sputnik.

In common with Rabbi Cooper, the  analyst is certain that much more is needed to tackle the spread of online hate, “whether the anti-Semitism that drove this latest attack, the Islamophobia that led to Christchurch or the racial Islamist hate drives groups like ISIS and led to the Sri Lanka attack”.

Oboler stressed the importance of not only tackling hate as such but taking a more effective control of technology that serves as “a channel for extremist radicalization”.

“That takes expertise in hate speech, extremism and technology. We need to re-imagine the information super-highway just as we once needed to re-imagine the highway itself as cars replaced horses. We need to protect freedom of speech, but that freedom must stop short of allowing the sort of hate that leads to violence”, the expert concluded resolutely.

According to Oboler, the attack at the Chabad Synagogue in Poway near San Diego, California was definitely “an act of violent extremism”. He recalled the fact that the attacker “spent a year and a half online becoming radicalised on /pol/ on 8chan”.

“From the anti-Semitism he found there, drawing on his Christian faith, he became interested in more traditional Christian anti-Semitism”, the commentator noted, adding that the shooter’s manifesto refers “to blood libel, the false allegations that Jews used the blood Christian children in rituals, and deicide, the allegation that the Jews were responsible for the death of Jesus — a claim repudiated by the Second Vatican Ecumenical Council in 1964”.

Oboler dwelled separately in his comments on a deeply moving Facebook post made by his friend, who herself is a friend of the woman killed in the attack, Lori Gilbert Kaye:

“Lori's family have asked for it to be shared. In the post, Audrey Jacobs writes about her friend and how she engaged in good deeds, and her final good deed was taking the bullet meant for Rabbi Mendel Goldstein and saving his life — although he was still shot in the hand”, the speaker shared, adding his friend wrote about the devastated husband and “22-year-old daughter Lori has left behind”.

Speaking about the other victims, he specially referenced “an 8-year-old girl, Noya Dahan and her uncle, 32-year-old Almog Peretz who was visiting from Sderot in Israel, a city regularly under fire from rockets out of Gaza”, adding that the wounded girl’s family had moved to the United States to escape “that violence”. To conclude, he quoted his friend Audrey as saying: “Anti-Semitism is real and is deadly. Hate crimes are real and are deadly”.

After the synagogue attack, the teen-aged perpetrator turned himself in to the police, having informed security services about his involvement in the attack.

Prior to it, an anti-Semitic letter was reportedly posted online, authored by a user who called himself John T. Earnest, which is believed to coincide with the suspect’s name. The author of the letter pointed out that he had started preparations for the attack shortly after the Christchurch mosque shooting, which rocked New Zealand in early March, leaving as many as 50 dead. The letter also reportedly brought up the 2018 shooting in Pittsburgh — the deadliest attack against the Jewish community in the United States to date.