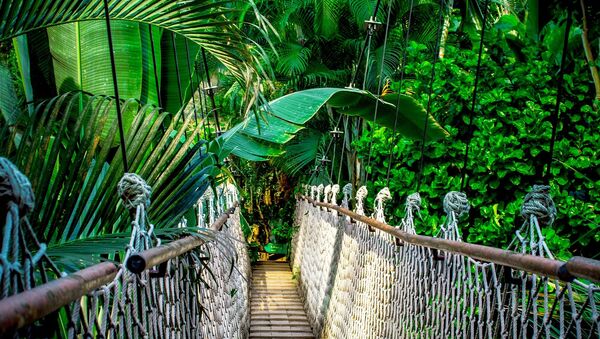 Humans destroyed around 30 million acres of tropical rainforest - an area the size of Belgium - in 2018, according to new information, even as environmentalists note that “forests are our greatest defence against climate change.”

According to new research published Thursday based on data obtained from Global Forest Watch — an organization that monitors global forests in near real-time — the decline is the fourth-highest annual loss since global satellite data started being collected in 2001.

The rate of destruction was slightly higher in 2017 when an estimated 42 million acres were destroyed due, in part, to forest fires. Other contributors to rainforest habitat loss include clearing trees for palm oil in Asia and Africa, as well as soybean and biofuel crops in South America.

"The world's forests are now in the emergency room," stated Frances Seymour of the World Resources Institute, the organization that conducted the study, cited by Eco-Business.

"It's death by a thousand cuts — the health of the planet is at stake and band aid responses are not enough," she added.

According to the report, tropical rainforests are a linchpin to the global forest ecosystem by sustaining habitats for many animals including orangutans, gorillas, jaguars and tigers. Rainforests are also extremely important for controlling climate change because they absorb around a third of all greenhouse gas emissions released globally.

"Forests are our greatest defence against climate change and biodiversity loss, but deforestation is getting worse," John Sauven, executive director of Greenpeace UK, told Eco-Business, commenting on the study's findings.

"Bold action is needed to tackle this global crisis including restoring lost forests. But unless we stop them being destroyed in the first place, we're just chasing our tail," he noted.

In 2002, 71 percent of the world's tropical forest loss was in Brazil and Indonesia. However, last year, loss from those two countries made up 46 percent of all rainforest loss. Many other countries, including Colombia, Côte d'Ivoire, Ghana and the Democratic Republic of the Congo have become deforestation hotspots.

According to Global Forest Watch, most of the 2018 forest loss in Brazil was caused by illegal loggers and militias cutting down trees in the Amazon basin.

In January, Brazilian President Jair Bolsonaro accelerated the ecocatastrophe by declaring that he would permit commercial mining and farming on indigenous tribal reserves in the country's rainforests.

Leading the way in ending these highly-damaging practices, forest loss in Indonesia in 2018 was the lowest it has been since 2003, thanks to the imposition of a moratorium on forest-clearing by Jakarta.

"We mean business when we say we would like to reform our forest and peatland management. There will be no new permits on 158 million acres," Agus Purnomo, an Indonesian adviser on climate change, told Reuters Television.