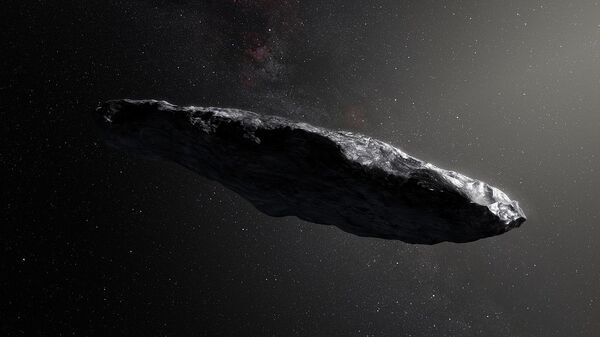 Back in 2017, a cigar-shaped asteroid called 'Oumuamua caused quite a stir becoming the only interstellar object detected passing through the Solar System, but new research now claims that, in fact, it was not the first visitor from outer space.

Chair of Harvard’s Astronomy Department Abraham "Avi" Loeb, who previously hypothesised that the mysterious interstellar object 'Oumuamua was an alien "light sail", has presented new research which casts doubt on it being a pioneer in our Solar System.

Viral
'Alien Attack' Spotted in Night Sky Leaves Norwegians Baffled (PHOTO, VIDEO)
Together with undergraduate student Amir Siraj, Loeb thoroughly examined a NASA catalogue of meteors for unusual, 'Oumuamua-like trajectories, and managed to identify a tiny meteor that had burned up in Earth’s atmosphere back in 2014.

The space rock of 90 cm in diametre disintegrated above Papua New Guinea, but its inexplicable speed, 60 km/s (134,216 mph), indicated that the object was not bound by the Sun's gravity.

Having published their findings in the newly-released paper, "Discovery of a meteor of interstellar origin", the two scientists assumed that its high speed "implies a possible origin from the deep interior of a planetary system or a star in the thick disk of the Milky Way galaxy".

"One would expect a much higher abundance of smaller interstellar objects, with some of them colliding with Earth frequently enough to be noticeable. This discovery enables a new method for studying the composition of interstellar objects, based on spectroscopy of their gaseous debris as they burn up in the Earth's atmosphere", they wrote.

UFOlogists Spot Mysterious 'Alien' Figure in New Mexico Desert (VIDEO)
'Oumuamua was detected in October 2017 whizzing past the Sun, too fast to have originated in our solar system, and was called the first-ever interstellar object discovered before disappearing from view in January 2018.

Loeb and another Harvard professror, Shmuel Bialy, wrote in a paper for the Astrophysical Journal Letters that 'Oumuamua might have been a "light sail, floating in interstellar space as a debris from an advanced technological equipment".

Loeb, who examined the object's "peculiar acceleration", also suggested at the time that 'Oumuamua "may be a fully operational probe sent intentionally to Earth's vicinity by an alien civilisation".

The scientist doubled down on his assumption in last year's interview with The New Yorker, saying that 'Oumuamua might be a "message in a bottle".

"I do not view the possibility of a technological civilisation as speculative, for two reasons. The first is that we exist. And the second is that at least a quarter of the stars in the Milky Way galaxy have a planet like Earth, with surface conditions that are very similar to Earth, and the chemistry of life as we know it could develop".