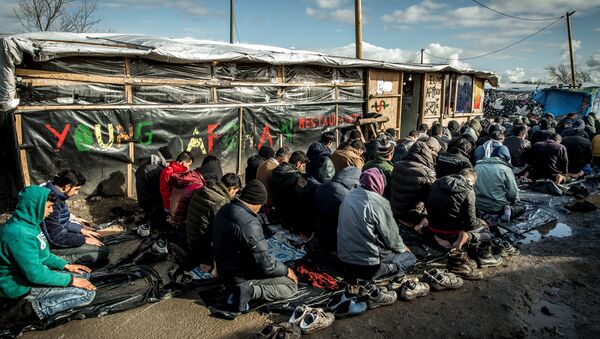 On 25 April, French President Emmanuel Macron emphasised the need to reform the Schengen Area, adding that some EU states could be excluded from it. Speaking to Sputnik, Bristol-based professor Gino Raymond has shed light on the president's motivation as well as the bloc's prospects in the near future.

During a press conference at the end of the Great National Debate French President Emmanuel Macron said that the Schengen Area no longer works, dropping a hint that those states that refuse to participate in the distribution of migrants should be thrown out of the common zone.

"The attempt to share the burden posed by migrants by proposing quotas to EU Schengen members, especially for refugees from conflict regions, has failed in the past due to the resistance shown especially by Eastern European states such as Hungary and Slovakia, among others", Gino Raymond, professor of Modern French Studies at University of Bristol told Sputnik.

Sweden Threatens EU States With Sanctions Over Immigration
Swedish Prime Minister Stefan Lofven earlier came up with a similar concept, offering to impose sanctions on those EU countries that oppose taking in refugees.

"If they are not ready to take responsibility, then it will come at a cost, it will not be possible to receive EU funds in the same way as today", the Swedish prime minister said in an interview with the daily newspaper Dagens Nyheter.

It appears that Macron's approach may exacerbate already strained relations over the refugee problem within the European bloc. According to the professor, countries opposing Brussels' "open border" policy, such as Hungary, are unlikely to back down.

Therefore, he believes that "relations within the EU over the migration issue will remain strained and may even worsen, if the current struggle or power in Libya leads to an increased wave of clandestine migration from across the Mediterranean".

Referring to the French president's notion that the "Schengen zone and the Dublin Agreement no longer work", Raymond explained that Brussels is currently pushing ahead with Dublin III, "i.e. a third version of the agreement on how to deal with migrants crossing its borders".

This indicates that "the EU is running to catch up with the situation and is evidence of how difficult it is to persuade member countries to play by the same rules", the academic opined. He explained that "each time there is a surge in migration, prompted by a crisis in a nearby region, the lack of cohesion in the EU is exposed".

According to the professor, there is looming crisis on the bloc's horizon.

"The EU, in particular the group of founding members, will persevere with what it sees as its historic mission to secure peace, democracy and prosperity on the old continent. But the prospects for fulfilling this mission successfully are becoming more clouded", he noted.

Macron Trying to Appease Both the Right and the Left

Meanwhile, right-wing EU parties are gaining ground with recent polls showing that Eurosceptics are due to gain a great deal of seats in the upcoming elections. According to the professor, the French president is making every effort to appease both the Right and the Left.

"For some time now Macron has been trying to resolve the tension between two ambitions: to be the great international leader who will take the European project forward while appeasing constituencies at home who, for a variety of reasons, feel threatened by the prospect of ever greater EU integration", Raymond pointed out, adding that at the same time Macron is talking of "developing a Europe which 'protects'… its citizens from the abuses of global capitalism" for those "broadly on the left".

Two-Faced Janus: Is Macron Snubbing US by Boosting Sino-French Ties?
Earlier, on 4 March, Macron outlined his vision of a "renewed" Europe in an open letter, calling for the creation of a central EU budget to fund innovation, provide social security for all workers across Europe, and boost common defence.

However, the French president's proposals have not garnered much support and have even been criticised by CDU Chairwoman Annegret Kramp-Karrenbauer in an op-ed called, "Getting Europe Right".

Macron Seeking to Outmanoeuvre Le Pen Ahead of EP Election

The academic noted that ahead of the European Parliament elections Macron is seeking to convince his electorate that he can tackle the migration problem amid the further rise of "Marine Le Pen, who is determined to make her party more respectable and which may well come top of the polls in the forthcoming European elections".

"Mindful, of course, that Marine Le Pen's Rassemblement National [National Rally] may well top the polls as the single most successful party in next month's European elections, Macron wants to reassure the voters of the centre and the right that his government will find some way of tackling the problem of clandestine immigration (which hits the headlines every time a squatter camp has to be closed), hence his comments about the Schengen area", the professor elaborated.

Le Pen, Salvini, Farage "Sitting in the Tree" Amid Plan to Take Down EU Liberals
He noted that the idea is not new since it was earlier made by former French President Nicolas Sarkozy "during his failed campaign for re-election to the French presidency in 2012".

"It is noteworthy that commentators in France have noted the very cordial relations between Macron and Sarkozy, in contrast to his chilly relationship with his former colleague and the previous President, François Hollande", the academic said.

The 2019 European Parliament election in France will take part on 26 May. The French will cast their votes for members of the 9th French delegation to the EU legislative body as part of elections held across the bloc between 23 and 26 May 2019. The newly-elected MEPs will represent 512 million people from 28 member states.