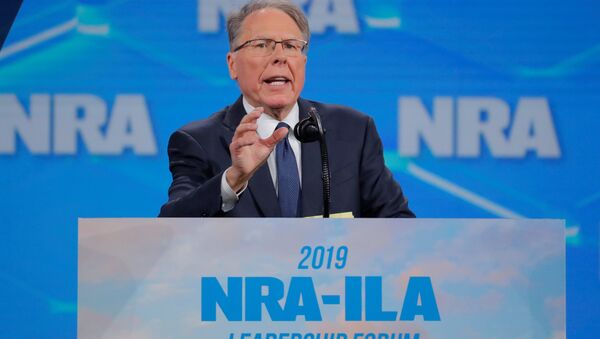 The Association accused its contractor for taking NRATV too far into politics and filed a lawsuit alleging mishandling of money. In response, the contractor’s employee – who is also NRA’s president – seeks to undermine NRA long-time CEO Wayne LaPierre.

The National Rifle Association, a normally "buttoned-up organization" — according to The New York Times — is in turmoil, as the organization's president Oliver L. North seeks to oust Wayne LaPierre, the association's CEO since 1991.

According to the Times report, North asked LaPierre to resign and formed a committee tasked with investigating financial operations that may threaten the NRA's status as a nonprofit. However, LaPierre responded with a letter in which he accused the president of blackmailing with leaking of damaging information in an effort to force him to step down.

"Yesterday evening, I was forced to confront one of those defining choices — styled, in the parlance of extortionists — as an offer I couldn't refuse," LaPierre wrote. "I refused it."

He also wrote that North said "the letter would not be sent — if I were to abruptly resign," adding that "[North] stated that he could ‘negotiate' an ‘excellent retirement' for me."

The Times connects the ongoing power struggle with a legal battle between NRA and Ackerman McQueen, a company that runs NRATV media service, and, by coincidence, employs North as a host for one of its series.

NRA accused Ackerman of taking NRATV too far into politics, taking the media service far beyond the field of gun rights. The lawsuit says Ackerman failed to provide detailed information on spending the $40 million it receives from the association annually, as well as information on NRATV's unique visitors and various other performance measures.

Viral
WATCH Cell Phone Apparently Thrown at Trump at NRA Convention
The lawsuit says Ackerman might have overbilled the NRA and that a conflict of interest for took place for North, who combined the position of NRA president and an Ackerman employee.

It is unclear whether North will be able to sway the organization's board of directors towards ousting LaPierre, who led the NRA for decades. Until recently, the position of NRA president was ceremonial, although North recently requested payment for his duties, the Times report says.

With the board of directors set to meet Monday, the crisis resolution may come soon, the report notes.

In the meantime, US President Trump attended the NRA convention in Indianapolis Friday. During his speech at the convention, Trump announced his decision to withdraw from a non-ratified UN Arms Trade Treaty, which seeks to impose limitations on conventional weapons trade.