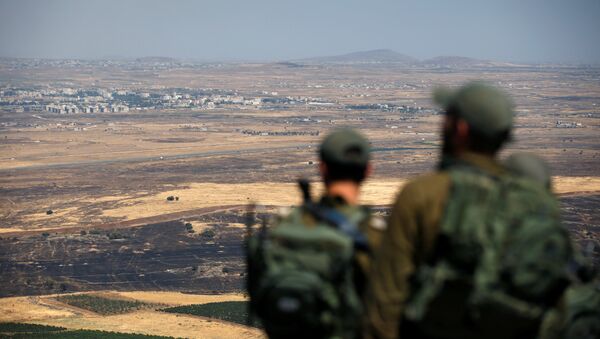 NUR-SULTAN (Sputnik), Anastasia Levchenko - Iranian forces in Syria remain around 80 kilometers (50 miles) away from the border with Israel despite Washington's statement that it recognizes Israeli sovereignty over the Golan Heights, Russian Special Presidential Envoy for Syria Alexander Lavrentyev told Sputnik in an interview.

"We have reached agreement with our Iranian friends that certain units that have been there [at the Syrian border with Israel] in order to ensure security of the southern de-escalation zone will be transferred to a safe distance, from 75 to 80 kilometers. They fulfill their promises," Lavrentyev said, when asked if Trump's statement had triggered the approaching of Iranian forces to the border.

In July 2018, Iran agreed, due to the Russian mediation, to move its units present in Syria away from the border with Israel by 85 kilometers, which significantly reduced Israeli concerns, according to the presidential envoy. The recent statement by US President Donald Trump on the US recognition of the Israeli sovereignty over the Golan Heights, disputed between Israel and Syria, could have made Tehran change its decision and approach again the border with the disputed strategic plateau.

Israel has been long accusing Tehran of using Syria as a playground for a possible future military attack against Tel Aviv. Tehran has repeatedly denied those claims, stressing that it solely provides military advisors' assistance to Syria at Damascus' request to help the country in its fight against terrorism.

Addressing the issue of foreign troops pullout, the Special Presidential Envoy noted that the idea to create an international working group on foreign troop withdrawal from Syria remains in place, but stabilisation in the Arab country must come first.

"There was an idea to create this group in order to contribute to the Syrian crisis settlement and the withdrawal of foreign troops from the Syrian territory… Perhaps, it would be righteous to make effort toward withdrawal of all the foreign [forces] from Syria, but to do this, a strong Syria is needed. The situation in Syria should be stabilized, and all the terrorist groups should be eliminated," Lavrentyev said.

Russian Deputy FM Explains Why Moscow Doubts Full US Withdrawal From Syria
He recalled that Russian President Vladimir Putin had praised the idea to create an international working group on foreign forces withdrawal from Syria as an interesting one. According to Lavrentyev, the Russian leader has said that it will be possible to return to this matter only after stabilization in Syria is reached.

Media reports that Russia intended to create such a group, which could include Syrian neighbors, namely Israel, emerged in February.

Touching upon the Syrian Constitution Committee matter, the diplomat said that the United Nations still disagreed with six names in the list of candidates for the committee, but work on its creation continues.

"The fact is that these six names still need to be coordinated. The acceptable formula [of the committee's composition] is yet to be found — I mean one that the government, the opposition and the [UN] special envoy [for Syria] would be satisfied with. But we are already close to this. Work continues. I just believe that time is needed, taking into consideration that the new special envoy has asked us to introduce a package solution, which would include everything, and has expressed his willingness [to favor it]," Lavrentyev said, when asked if the UN stand on the candidates for the committee had changed when a new special representative had been appointed.

He explained that UN Special Envoy for Syria Geir Pedersen had to announce the creation of the constitutional committee and its subsequent launch only after all the parameters were coordinated.

"By the way, the process of defining the parameters is going on fine. I believe that progress is obvious. This is very good," Lavrentyev noted.

UN Mechanism on War Crimes Probe Hinders Intra-Syrian Dialogue - Damascus
Lavrentyev also raised hope that UN Special Envoy for Syria Geir Pedersen, who was appointed to the position in late October 2018, will stay free from any foreign influence and will move the settlement process forward.

"Everyone should be independent in the United Nations. Of course, we believe that he will not be subject to any influence. We hope for this. If he continues to stick to these principles, this will be a great help in moving the negotiations process forward," Lavrentyev said, when asked if he believed that Pedersen was an independent figure.

When asked about the new summit on Syria, the diplomat told Sputnik that Russia, Turkey, France and Germany may hold new joint summits on the situation in Syria in the future.

"It was quite an interesting format. In principle, we do not rule out that a new meeting in such format could be held, but only if there is hope to reach some really common results. Such meetings should have some 'added value' — we should come up with some working options that will… ensure the settlement of the Syrian crisis in various areas, including the humanitarian sphere, finance and reconstruction. Creative ideas should be in place, while our foreign partners have not proposed anything yet. Let's see what happens," Lavrentyev said in an interview.

Russia, Turkey, France and Germany held a summit on Syria in late October 2018 in the Turkish city of Istanbul. A new meeting in such a format has not been planned yet.