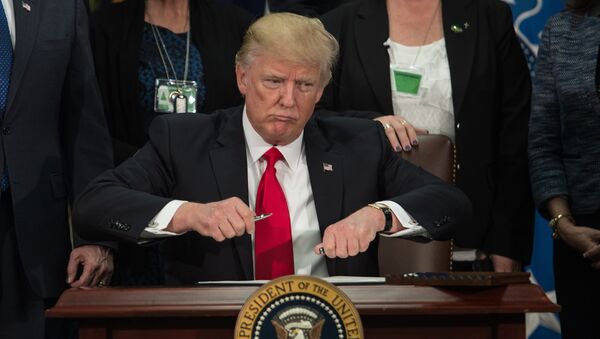 The White House is in intense talks on options for the US president to pursue a deal building on the New START Treaty, which expires in 2021, officials have told CNN.

US President Donald Trump is eying a new potential signature foreign policy achievement: a grand nuclear deal with Russia and China, according to CNN.

Donald Trump prides himself on being a great dealmaker. “Deals are my art form. I like making deals, preferably big deals”, he has been known to say. Now the US president is said to be publicly hinting that a deal is on his agenda.

"Perhaps we can negotiate a different agreement, adding China and others, or perhaps we can't", Trump said, mentioning his decision to pursue a treaty during his January address to the nation.

At a meeting with Chinese Vice Premier Liu He in the Oval Office in April, Trump voiced the belief that Moscow and Beijing would "come along" on a nuclear deal and said it could happen after the US and China complete trade negotiations.

Some observers, however, are voicing concern that the administration is actually seeking a way out of the second nuclear pact, deeming it constraining and out-dated.

"The only reason you bring up China is if you have no intention of extending the New START Treaty", said Alexandra Bell, senior policy director at the Centre for Arms Control and Non-Proliferation.

The Trump administration has not set out a timeline for negotiations or even raised the prospect with China and Russia. Secretary of State Mike Pompeo told lawmakers that the US was in the "very beginning of conversations about renewing" the treaty.

However, the New START was built on decades of negotiations regarding the original START Treaty. A deal that would include a new country could require starting from scratch.
Both US and Russian officials have signalled that a renewal could be drawn-out and difficult, as Russia has been questioning US compliance with the New START.

"The extension of the New START is not a simple technicality that could be resolved in a couple of weeks", Russian Ambassador to the US Anatoly Antonov said at an arms control conference this month. "Serious issues must be settled".

In February, President Donald Trump announced that the US would unilaterally withdraw from the INF Treaty, pointing towards Russia’s 9M729 cruise missile, which American officials claim violates the existing limitations.