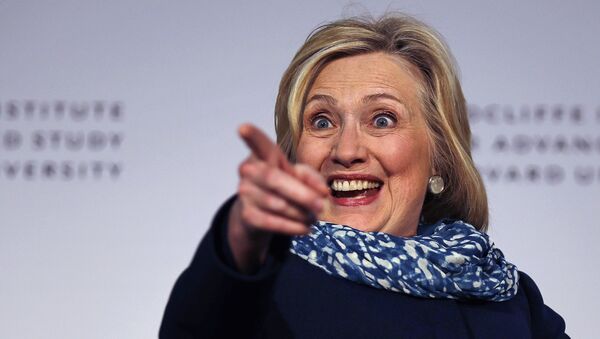 Earlier, Ukraine's prosecutor general launched an investigation into the Clinton campaign's possible collusion with senior Ukrainian anti-corruption officials ahead of the US 2016 presidential election, targeting then-Trump campaign chair Paul Manafort and, by association, Trump himself.

President Trump has said he will leave it to Attorney General William Barr as to whether to move forward with a formal investigation into the possible Ukrainian attempt to meddle in American elections.

"It sounds like big stuff, it sounds very interesting with Ukraine. I just spoke to the new president a little while ago, two days ago, and congratulated him on an incredible race…But that sounds like big, big stuff. I'm not surprised", Trump said, speaking to Fox News' Sean Hannity on Thursday about the Clinton-Ukraine allegations.

Twitter Ignites as Hillary Calls Mueller Report 'Part of the Beginning'
Asked whether Americans need to see the evidence of possible efforts by Ukrainian officials to help the Clinton campaign being offered by Kiev, Trump said they did.

"I think we do, and frankly we have a great new attorney general who's done an unbelievable job in a very short period of time, and he's very smart and he's very tough and I would certainly defer to him. But I would imagine he'd want to see this", the president said.

"People have been saying this – this whole, the concept of Ukraine, they've been talking about it actually for a long time, you know that. And I would certainly defer to the attorney general and we'll see what he says about it. He calls 'em straight, that's one thing I can tell you", Trump concluded.

Trump Slams Mueller's Russia Probe as 'Coup' and 'Biggest Scandal'
In early April, a senior official from the international legal cooperation department of Ukraine's prosecutor general's office told The Hill that they have of wide variety of information which may constitute evidence of wrongdoing by the Democratic Party, the Clinton campaign and their allies in Ukraine related to the 2016 election. This reportedly included sworn statements from two officials apparently admitting that their agency tried to swing the election in Clinton's favour by digging up dirt on Manafort, who had served as an aide to former Ukrainian President Viktor Yanukovych before becoming Trump's campaign chairman, as well as contacts between Democrats and officials in Kiev searching for dirt on Manafort and Trump. The official complained about the Trump administration's apparent lack of enthusiasm in looking into its evidence.

For over two years, the Ukraine-Clinton collusion allegations took a backseat to claims of a conspiracy between Trump and Russia, with the latter claims completely debunked with the release of the Mueller report last week. President Trump had asked then-Attorney General Jeff Sessions to look into the Ukraine matter as early as mid-2017, and complained about Sessions' apparent lack of action. Sessions resigned in November 2018, with Trump picking William Barr to succeed him.