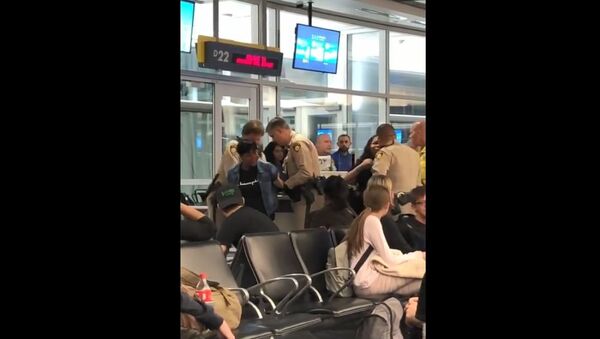 A North Carolina mother spent 12 hours in jail and is now facing criminal charges stemming from a confrontation she had with a flight attendant over filthy plane seat.

Rosetta Swinney had boarded a Frontier Airlines flight from Las Vegas back to Raleigh-Durham International Airport in North Carolina April 20 with her 14-year-old daughter when they realized her daughter's seat was dirty, she told local ABC affiliate 11 Eyewitness News.

Very dirty. "She jumped up to say 'Mom! My hands are wet.' She smelled it. She says 'This is vomit, Mom.' So we went to look. It was on the bag, all over her shirt, her hands," Swinney said, according to the outlet.

The flight had already been delayed for cleaning, she noted. When Swinney alerted a flight attendant to the predicament, the attendant said "that's not my job," the mom reported.

Frontier Airlines said in a statement, "The flight attendants apologized and immediately invited the mother and her teenage daughter to move to either end of the plane so that the seat area could be cleaned by a cleaning crew. The mother and daughter were also told that once boarding was complete they would be provided other seats if available. The daughter was also offered cleaning products for herself and invited to use the lavatory to wash up. The mother was unsatisfied with the response and became disruptive."

It was at that point, Frontier alleges, the decision was made to take Swinney and her daughter off the plane and put them on another flight. When Swinney refused to get off the flight, law enforcement was called.

"The mom asked to have seats moved (there was empty seats) the stewardess demanded they sit down, mom said no." Frontier staff then called TSA, which "was on a power trip," she continued. TSA called the police. "Cops agreed with mom but said airlines wanted them off plane….we all had to get off and they arrested this mom while her daughter looked on in horror. We ended up not leaving till almost 230 in the am…..I along with most of the plane will not be traveling frontier…horrible!"

Another Facebook user with the handle Nikki Nikole corroborated that account. She said the flight attendant told Swinney and her daughter to clean up the mess themselves, and when they refused, said "fine, you're rude and you don't have to fly with us tonight" and asked Swinney to leave. "Keep in mind there is an entire row (3) of empty seats in front of us. The attendant could have simply switched their seats and asked someone to come cleanup the vomit," she wrote.

Swinney says she was "humiliated" by the ordeal. "What really hurt me is for my child to see me getting handcuffed and taken away from her," she told 11 Eyewitness News. "Twelve hours I was in jail. Twelve hours." While she was in jail, her daughter was placed in protective custody. Swinney now faces a misdemeanor trespassing charge, which she said she intends to fight.

Air travel horror stories are nothing new, of course, and even the genre of "disgusting seats" is becoming more and more diverse. In November 2018, a US man was told he had no option but to sit in a seat covered in feces for his Atlanta to Miami flight with Delta, Sputnik reported at the time. A woman traveling from London to Boston on British Airways says the company sat her daughter in a urine-soaked seat and refused to clean it or offer another option for the seven-hour flight.