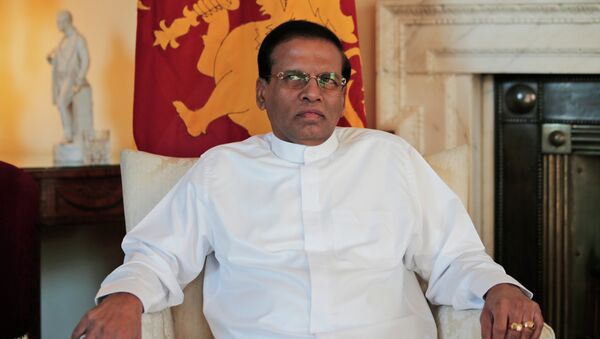 Taking responsibility for the tragedy, President Sirisena said that security forces and police are fully capable of stamping out the menace of terrorism from Sri Lanka. He also indicated that even the United States was unable to prevent the 9/11 terrorist strike in 2001.

New Delhi (Sputnik): Sri Lanka President Maithripala Sirisena has categorically ruled out allowing foreign troops to weed out about 130-140 suspects affiliated to Daesh* said to be operating in the country. Making an indirect reference to the fact that even the United States had not been successful in preventing the 9/11 terrorist attack in 2001, President Sirisena said this sort of terrorism is not unique to Sri Lanka.

"Even the most powerful nations on earth have suffered", Sirisena said while addressing media heads in Sri Lanka's capital Colombo.

"No foreign army will step into Sri Lanka, but we will get assistance from other nations to help us fight Daesh. I will stamp them out from Sri Lanka. Our police and security forces are capable of achieving this", Sirisena said on Friday morning.

Daesh Role in Sri Lanka Bloodbath is a Warning for S Asia - Security Analysts
President Sirisena further accepted responsibility for the security lapse that allowed Daesh-trained terrorists to carry out serial bomb blasts in prominent churches and up-market hotels across the island nation on 20 April, killing 253 people and injuring more than 500.

He said highly descriptive information was available with the head of Sri Lanka's intelligence on 4 April, including information related to the targets and method of the attack.

It may be recalled that suicide bombers struck churches and hotels in Colombo, Negombo and Batticaloa. Most of those killed were Sri Lankans, but dozens of foreigners also died in the tragic incident.

Sri Lanka Postpones Visa Facilitation With 39 Countries After Bombings
At least nine people are suspected of carrying out the attacks. Police continue to conduct raids and have released photographs of another seven people they want in connection with the attacks.

Authorities in Sri Lanka had pinned the blame for the blasts on a local fringe Islamist extremist group going by the name of the National Thowheed Jamaath (NTJ). Later, Daesh claimed responsibility for the attacks and even released a video showing eight men, but provided no evidence of direct involvement.