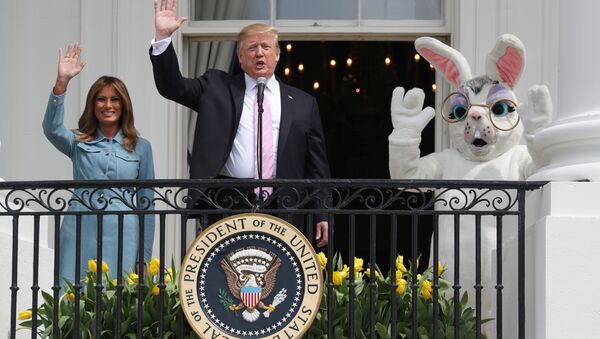 It's not the first time Conway has slammed the President via Twitter, despite his wife being one of the longest-serving high-ranking officials in the administration, and having publicly disavowed his criticisms.

George Conway, husband of senior White House advisor Kellyanne Conway, has made the Twitter hashtag #DerangedDonald go viral in response to President Trump accusing UK eavesdropping agency GCHQ of monitoring him at the behest of the Obama administration.

In a damning tweet published 25th April, Conway said "Deranged Donald" was "back at it again".

"Deranged Donald can do things like this and it's not even the top of the news, because it gets lost beneath all of the other deranged things Deranged Donald does. #DerangedDonald," he fulminated.

He went on to state Trump had "this neat job where he's supposed to receive and read books with more accurate, highly valuable, top secret information, but he doesn't like those books unless they have lots of pictures and tell him how great he is. #DerangedDonald".

The sobriquet quickly began trending globally and spent a period among the social network's most popular hashtags, being used in excess of 200,000 times in under 24 hours. Prominent mental health specialist Jeffrey Guterman replied to Trump's tweet welcoming "Sleepy Joe" Biden to the 2020 Presidential race by announcing "#DerangedDonald is trending. Good morning all!".

Gotta love this: I’m an Aussie living in France and this incredible #DerangedDonald hashtag is now number two worldwide! pic.twitter.com/J7SoWocCOt

Conway's attacks on Trump are an almost daily occurrence — but the President rarely responds to the jibes, one exception being in March when Trump resident labelled Conway a "stone cold loser" and "husband from hell" in response to him alleging Trump's mental state was "getting worse and worse".

George Conway, often referred to as Mr. Kellyanne Conway by those who know him, is VERY jealous of his wife’s success & angry that I, with her help, didn’t give him the job he so desperately wanted. I barely know him but just take a look, a stone cold LOSER & husband from hell!

On 25th April, Trump quoted claims from controversial former CIA analyst Larry Johnson that UK intelligence services spied on his 2016 Presidential campaign, stating "it is now just a question of time before the truth comes out, and when it does, it will be a beauty!".

The allegations date back to the earliest days of Trump's presidency — in a March 2017 White House press conference, then-presidential spokesperson Sean Spicer said the Cheltenham-based eavesdropping agency had colluded with the former POTUS.

The spying agency also broke cover to comment on Trump's latest mention of the allegations, saying they were "nonsense" and "utterly ridiculous and should be ignored".

However, while GCHQ may not have actively ‘colluded' with the Obama administration, or spied on Trump's campaign at its request, in April 2017 The Guardian reported Britain's spy agencies "played a crucial role" in alerting their counterparts in Washington to "contacts between members of Donald Trump's campaign team and Russian intelligence operatives" back in 2015.

Big Win: Britain's GCHQ Spygrid Violates Right to Privacy, ECHR Rules
The article, based on the claims of a "source close to UK intelligence", said the compromising was passed to the US as part of a routine exchange of information, and over the next six months — until summer 2016 — a number of western agencies shared further information on contacts between Trump's inner circle and Russians.

"It is understood GCHQ was at no point carrying out a targeted operation against Trump or his team or proactively seeking information. The alleged conversations were picked up by chance as part of routine surveillance of Russian intelligence assets. Over several months, different agencies targeting the same people began to see a pattern of connections that were flagged to intelligence officials in the US…US and UK intelligence sources acknowledge GCHQ played an early, prominent role in kickstarting the FBI's Trump-Russia investigation, which began in late July 2016. [It was] the pivotal whistleblower," the article stated.

Now that claims of "contacts between members of Donald Trump's campaign team and Russian intelligence operatives" have been utterly discredited by the release of Special Counsel Robert Mueller's final report, the long-suspected central role British intelligence played in perpetuating the ‘RussiaGate' fraud is being increasingly scrutinised, as is the question of whether the agencies and individuals most intimately connected to the scandal knowingly perpetuated damaging untruths.

The former MI6 operative worked with the Bureau as a confidential informant 2010 — 2016 — Horowitz aims to ascertain if Steele was a credible source, and whether the FBI abused the Foreign Intelligence Surveillance Act by relying on Steele's fraudulent  ‘Trump-Russia' dossier to obtain surveillance warrants against Page.

The investigation could conclude as early as May — and there are suggestions the Inspector General's final report could "deeply undermine" Steele and "cast doubt on the veracity of the information Steele provided about Page the FBI included in its application for a FISA warrant".

Close Associate: The Integrity Initiative’s Intimate Connections to 'RussiaGate'
Horowitz is also investigating Steele's other work as a confidential FBI informant, and has already determined the Orbis Intelligence chief significantly over-hyped the significance and scale of his role in an investigation into the infamous 2010 FIFA bribery scandal.