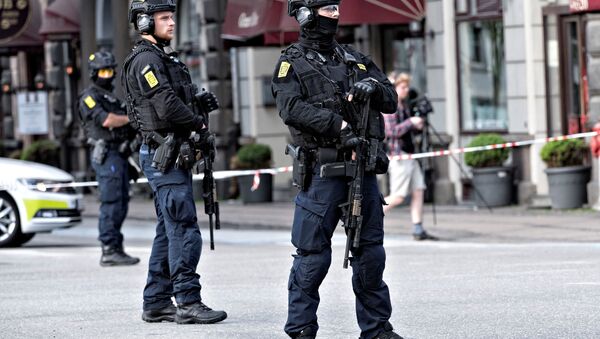 Hizb ut-Tahrir*, a radical Islamist organisation that seeks to establish a Sharia-based government, held a Friday prayer session near the Danish house of parliament in central Copenhagen in March.

When hard-line Islamists from Hizb ut-Tahrir held their controversial Friday prayer at Christiansborg Palace Square on 22 March, they had their own guards, who weren't formally authorised.

According to the Danish news outlet Den Korte Avis, the guards, who wore vests labelled "security personnel", had been instructed by the Copenhagen Police in a collaboration arranged in advance.

The news outlet cited a response from Conservative Justice Minister Søren Pape Poulsen to Martin Henriksen of the Danish People's Party, who heads the Danish parliament's Immigration and Integration Committee. According to Pape Poulsen, the Copenhagen Police considered it appropriate to "guide the applicant [Hizb ut-Tahrir] on any use of guards and security personnel in connection with the demonstration".

​Among others, the police stressed that security personnel must be approved officers from agencies authorised to carry out security work in public areas, but still instructed the demonstrators to wear visible vests marked "security personnel".

In his question to Poulsen, Martin Henriksen inquired which security company was guarding the Friday prayer at the Christiansborg Palace Square and who had given them the permission, if it was not from an authorised security firm.

"It is most surprising that the Copenhagen Police have advised Hizb ut-Tahrir that their own guards must carry something that reminds of a uniform", a dismayed Martin Henriksen told Den Korte Avis. "I am honestly shocked by the level of management at the Copenhagen Police, and I am deeply surprised that the justice minister has nothing to say about it".

Martin Henriksen was present at the castle square, and he wondered:

"The so-called security staff behaved like guards. It is my clear view, and it is, in my opinion, untenable that Danish police advise a social subversive association on how they can bring their own guards to a Muslim Friday prayer in front of Christiansborg Palace. It's just wrong no matter how you slice it. The police should have told Hizb ut-Tahrir that they will not accept their own private guards, regardless of how you choose to call them", Martin Henriksen said, calling the situation "grotesque".

Hizb ut-Tahrir is an international pan-Islamist organisation that aims to enforce a Muslim state governed by Sharia law. Estimations of its worldwide membership range between "several hundred thousand" and "over a million". Despite being banned in the majority of Arab countries (with only a few notable exceptions), as well as in Russia, Germany, and China, the organisation remains active in vast parts of Europe. Denmark hosts Hizb ut-Tahrir's Scandinavian headquarters.

The Danish People's Party has spearheaded several attempts to ban Hizb ut-Tahrir as incompatible with democracy, earning the support of other parties.

"I clearly believe that Hizb ut-Tahrir should be banned if there is a basis for it", Prime Minister Lars Løkke Rasmussen of the liberal-conservative Venstre Party said in March.

However, the Prosecutor General's office has ruled that an outright ban would violate the provisions of the constitution pertaining to the freedom of expression.