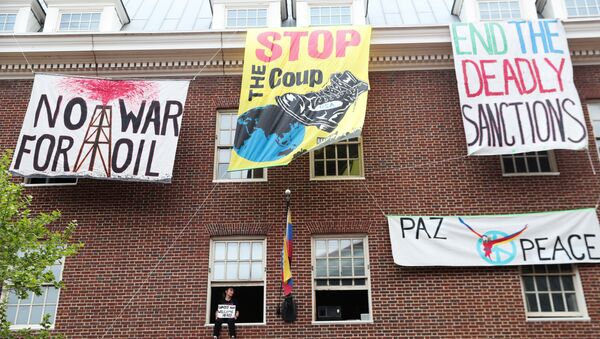 © REUTERS / SHANNON STAPLETON
Subscribe
International
India
Africa
When Venezuelan opposition forces in the US seized a consulate and military attache in the US last month, they thought the embassy itself would be next. However, activists have formed an Embassy Protection Collective and, at the invitation of Caracas, have slept overnight for weeks in the Washington, DC, building to halt the seizure.

The collective was formed in early April by activists from such anti-war organizations as Code Pink, Popular Resistance and Act Now to Stop War and End Racism (ANSWER) Coalition. However, as early as March 21, Sputnik reported that they were taking actions to prevent the facility's takeover by Venezuelan opposition forces.

Since January 23, opposition leader Juan Guaido has claimed to be Venezuela's interim president, an office not provided for under the country's constitution. While the US and several European and Latin American nations have recognized Guaido's claims, he is relatively unknown inside the country, and about three-quarters of the world's countries, along with numerous international organizations such as the United Nations and International Monetary Fund, continue to recognize President Nicolas Maduro as Venezuela's leader. Maduro was re-elected in May 2018 by a large margin of votes in elections that were widely hailed at the time as free and fair.

"We feel this is part of an orchestrated coup that can lead to a civil war and can lead to tremendous violence," said Medea Benjamin, co-founder of Code Pink. "We want to say stop."

On Wednesday night, the last remaining Venezuelan diplomats at the facility, who represented Venezuela's permanent mission to the Organization of American States, departed the country as Venezuela leaves the organization. Protesters feared the diplomats' departure signalled the imminent entry of the facility by opposition forces working in conjunction with the US State Department.

While dozens of activists have spent the night in the facility since April 10, they also staged a rally on the sidewalk in front of the embassy Thursday morning, explaining why they opposed both a takeover of the embassy as well as regime change in Venezuela.

Kei Pritsker of the Embassy Protection Collective: "our legal presence here stands in stark contrast to the illegal, unrecognized Guaido opposition diplomatic mission… we're going to defend the embassy, to defend democracy… to defend the Venezuelan ppl from US imperialism." pic.twitter.com/XLLEP833QJ

​Mara Verheyden-Hilliard, a lawyer from the Partnership for Civil Justice Fund representing the collective, said at a press conference following the rally that "this is a lawful presence. Every person who is here, every person who has been inside, is here at the invitation of those lawfully in charge of this building, which is the Republic of Venezuela."

In fact, she said, "everyone who is here is defending the rule of law and defending fundamental democracy. They are doing what [US President] Donald Trump, what [US Special Envoy to Venezuela] Elliott Abrams, what [US National Security Adviser] John Bolton, what [US Secretary of State] Mike Pompeo, are not doing, which is standing up for international law, for human rights, for democracy and for rights here in the United States. Under the Vienna Convention, this property, a diplomatic compound, is inviolable. It doesn't matter if relations break down between the two countries; the property is inviolable. It cannot be seized by the government of the United States."

"Importantly, many of the people who are here, who have been here for two weeks, have established a legal tenancy under the laws of the District of Columbia," Verheyden-Hilliard said. "There has been no due process, no notice of eviction, which would be required in order to remove people who have a legal tenancy from this building."

Linda Winter, an activist who flew to DC from Chicago to participate in the protest, told Radio Sputnik's Loud and Clear Thursday that "it was a privilege to be part of this action in solidarity with the Venezuelan people."

​Venezuelan Foreign Minister Jorge Arreaza confirmed their claims, saying Thursday during a press conference at the United Nations that the building where the embassy is located, in Washington, DC's historic Georgetown district, is owned by the Venezuelan government, and the demonstrators are there at their invitation.

"We have to protect that Venezuelan building," Arreaza said. "It would be crazy to take it over illegally, right? Have we proposed to do that in the US Embassy in Caracas? Never."

Winter told hosts Brian Becker and John Kiriakou that a who's-who of police forces, from Metropolitan Police to the Secret Service, "had a huge presence outside the embassy" on Wednesday night, "with their vehicles and physically," including in the garden area behind the building, which is part of the embassy and thus also Venezuelan state property.

"There were a lot of unknowns" in coming to DC to join the protest, Winter said. "Would I be going back home on my return flight, or would I be in jail?"

Trump's election in November 2016 spurred Winter to become more politically involved; she quipped to Sputnik that "Trump radicalized me." However, she said that Democratic opposition has really dropped the ball on opposing Trump's policies that spurred her into action.

"Right now, the Democrats want to make war even more than the Republicans." she said. Seen up close, "politics looks a lot differently than I thought it did."

Ariel Gold, the national co-director of Code Pink, carried the protest far from the embassy and into the halls of the hawkish Atlantic Council think tank on Thursday, where Abrams was speaking.

A report published Thursday by Jeffrey Sachs and Mark Weisbrot of the Center for Economic and Policy Research quantified some of that damage.

"American sanctions are deliberately aiming to wreck Venezuela's economy and thereby lead to regime change. It's a fruitless, heartless, illegal, and failed policy, causing grave harm to the Venezuelan people," the economists wrote. "Among the results of broad economic sanctions implemented by the Trump administration since August 2017 [are] an estimated more than 40,000 deaths."

The report further notes that due to an 85 percent shrinkage in the availability of essential medicines, "more than 300,000 people were at risk because of access to medicines or treatment. This includes an estimated 80,000 people with HIV who have not had antiretroviral treatment since 2017; 16,000 people who need dialysis; 16,000 people with cancer; and 4 million with diabetes and hypertension (many of whom cannot obtain insulin or cardiovascular medicine)."

"These numbers by themselves virtually guarantee that the current sanctions, which are much more severe than those implemented before this year, are a death sentence for tens of thousands of Venezuelans," the report warns.