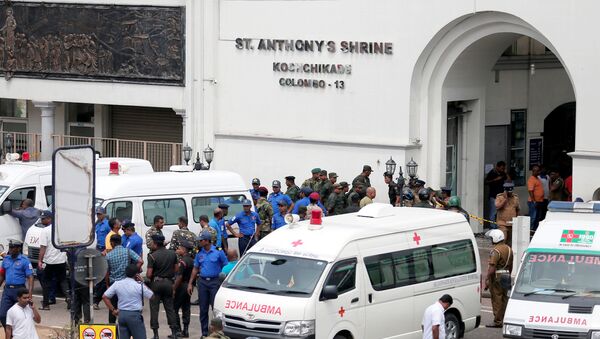 The US Embassy in Sri Lanka issued a statement Thursday warning about the possibility of more terror attacks over the upcoming weekend, citing Sri Lankan authorities.

​The warning comes in the wake of the Easter Sunday attack, when numerous bombings killed more than 250 people in Christian churches and top-end hotels. The authorities initially reported 359 dead, but later reduced the number, saying the calculation was complicated by the large number of dismembered bodies left by the blasts.

According to media reports, Indian intelligence officers warned Sri Lankan authorities about the attacks starting as early as 4 April. On 11 April, a Sri Lankan police official sent a memo to the country's security agencies, outlining the upcoming bombing threat in great detail, including names, addresses and phone numbers of suspects, the New York Times reports. However, many officials did not see the memo, the report says.

Sri Lankan President Maithripala Sirisena blamed Defense Secretary Hemasiri Fernando and Police Inspector General Pujith Jayasundara for failing to act on the warnings and called for their resignations. Fernando has already resigned, according to The New York Times report.

Asia
Sri Lanka Postpones Visa Facilitation With 39 Countries After Bombings
The attacks have been blamed on Sri Lankan Islamic terror group National Thowheeth Jama'ath ("National Monotheism Organization"), which is believed to have pledged its loyalty to the Daesh terror group. On 23 April, Daesh claimed responsibility for the attacks.

On Thursday, Sri Lankan police officials said they believe at least two terrorists who were supposed to take part in the Easter attacks were still on the loose. The police said they have information that another attack is coming, posted the suspects' pictures on social media and urged anyone with information about them to call a hotline.

Sri Lankan security services say terrorists might target Sufi shrines, according to the New York Times. Sufism, a mystical branch of Islam, is viewed by radical groups as a form of heresy.