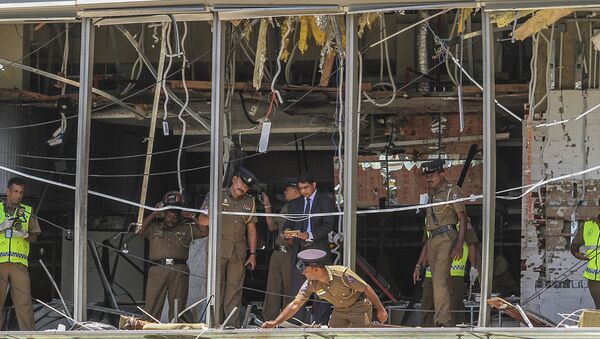 © AP Photo / Chamila Karunarathne
Subscribe
International
India
Africa
Sri Lankan Police have released a number of photographs of the puported suspects, inviting public help to apprehend them for the Easter Sunday bombings in churches and hotels.

New Delhi (Sputnik): Days after serial bomb blasts left 359 people dead and over 500 wounded in the island nation, Sri Lankan Police have issued photographs of six suspects, including three women, in the bombing. Police have sent out a clarion call seeking help from the public, while asking them to call hotline numbers.

The public has been requested to provide any credible information regarding the suspects to the Criminal Investigations Department (CID) which has been questioning several others, arrested over the last four days.

Earlier on Thursday, Sri Lanka Police discovered 200 detonators hidden in a canal in Hawaeliya, Nuwara Eliya, while three other people were taken into custody for possessing 21 home made grenades and six swords.