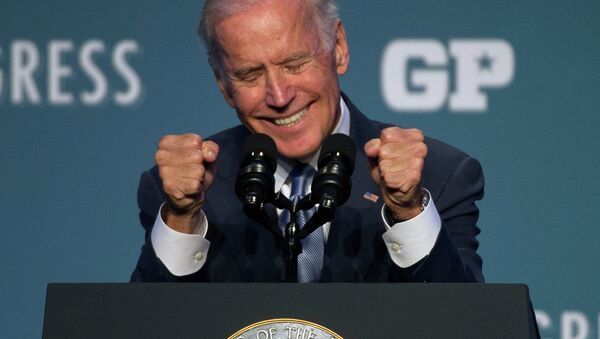 © AP Photo / Molly Riley
Subscribe
The 76-year-old politician and former vice president announced that he would seek the Democratic Party's nomination for the 2020 presidential election in a Thursday morning video tweet.

Biden, who served as a senator for over thirty years before becoming Barack Obama's VP, already ran for president in 1988 and 2008, but withdrew early on both occasions, ducking out of the 1988 race over a long-forgotten speech plagiarism scandal.

Ex US Vice President Biden Enters 2020 Presidential Race
During his time in the national spotlight as vice president, Biden became a popular meme figure over his gaffe-prone off-the-cuff speaking style, an apparent bromance with the president, and, more recently, a scandal involving his alleged tendency to 'inappropriately' touch multiple women and children.

The latter meme, dubbed 'Creepy Joe' online, is based on a series of photos and video of the former vice president appearing to violate the personal space of multiple women and young children, and has given rise to a never-ending series of photoshopped images, many of them remembered after Biden formally announced his bid for the White House on Thursday.

Throughout the affair, Biden has maintained his innocence, saying he was "not sorry" for "anything" he had ever done, and justifying his behaviour by saying that "the times have changed" and that personal space norms were different when he was growing up.

Another well-known source of Biden memes comes from the former vice president's close personal friendship with Barack Obama, with users tweeting an endless series of photos accompanied by hilarious captions to express the men's closeness over the years. With Biden's announcement that he was in the race, some users excitedly noted that they could hardly wait for the memes' return.

After a great night, sit back and enjoy some Obama Biden memes. pic.twitter.com/HSrV2WMA9p

Yay, the Biden is unleashed 😂 https://t.co/XasuWon3RF

The vice president's habit of saying the wrong thing at the wrong time, from swearing on hot mics, to making awkward (and perhaps) racist comments about minorities, has been widespread enough over the years for major networks to make 'best of compilations' about it, and to give rise to a special term: 'Bidenism'.

Following his announcement, users recalling this tendency to gaffe marked concerns over whether or not Biden would be able to defeat his greatest challenger – his tongue.

The things that make Biden lovable, Uncle Joe if you will, are the very things that can cause him to implode. I am skeptical that under the relentless glare of being the front runner he can stay disciplined enough not to… pic.twitter.com/PeFYJfiq93

How many hours after Biden's video announcement until his first gaffe, act of plagiarism, or episode of unwanted touching, nose-rubbing or sniffing…?

Biden is the most electable except for being a one man gaffe machine. And I’m a big fan of joe biden.

Last but not least, there is the Biden-Trump feud, which appeared to seethe ever since Trump became president, but exploded in March 2018, after Biden said that if he and Trump were in high school and Trump bragged about 'grabbing women by the *****', he'd "take him behind the gym and beat the hell out of him."

The comment received an immediate response from Trump himself, who nicknamed Biden "Crazy Joe" and accused him of being "weak, both mentally and physically" while acting "like a tough guy." Biden later expressed regret over his remark, but not before the meme machine got ahold of it, with users debating whether a fight between the two would be good for America.

The Biden-Trump fight is gonna be lit pic.twitter.com/JmC4MwhdM3

Joe Biden gets his wish to "take Trump behind the gym!" We'll see what's left of him after the "young guns" of the congress are through with him.

Joe said if he were in high school with trump, he would "take him behind the gym and beat the hell out of him." Trump tweeted "crazy Joe Biden is trying to act like a tough guy." Watching two old guys trying to out-crazy each other?? No thanks.

Donald Trump himself greeted his new challenger, welcoming "Sleepy Joe" to the race and saying he would see him in the general election if Biden made it past the primaries.

Welcome to the race Sleepy Joe. I only hope you have the intelligence, long in doubt, to wage a successful primary campaign. It will be nasty — you will be dealing with people who truly have some very sick & demented ideas. But if you make it, I will see you at the Starting Gate!