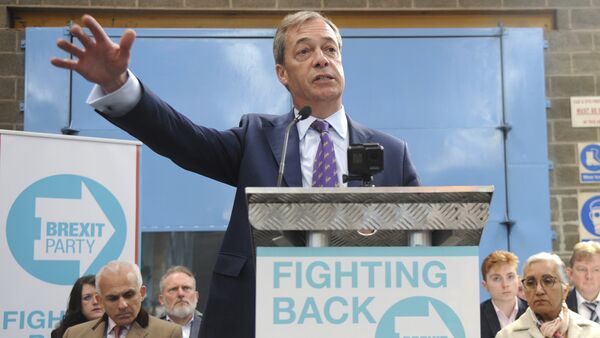 The former Minister for Prisons said Theresa May's failure to get the UK out of the EU by any means necessary has compelled her to come out of retirement.

Lifelong Conservative MP Ann Widdecombe has revealed she's returning to frontline UK politics — and will stand as a candidate for Nigel Farage's Brexit party in the May European elections.

Widdecombe, who was MP for Maidstone and The Weald 1987 — 2010, made her shock announcement on ITV's Good Morning Britain, describing Theresa May as the country's worst leader since Anthony Eden, whose jingoistic bungling created the 1956 Suez crisis. She also took aim at Labour leader Jeremy Corbyn, accusing him of engaging in cynical party-political point-scoring.

"Britain is an international laughing stock, parliament is a parody. The whole thing is making the electorate very fed up and everybody, both leavers and remainers, are saying get it done. [We need to] send a seismic shock to both major parties in, say the electorate has had enough, now we said what we wanted to do, just get it done and over. In these circumstances, the national good comes first — that's what everybody out there is saying and what the cloth ears in parliament are just not hearing," she said.

Le Pen, Salvini, Farage "Sitting in the Tree" Amid Plan to Take Down EU Liberals
She added that she hoped Farage's new party would "sweep to victory", and expanded on her comments in an interview with the Daily Express.

"I really thought my time in politics was over and done with but I felt compelled to step up. I will be voting Conservative in the local elections and I remain a member of the party but when Central Office reads this I expect they will kick me out. If that happens, then so be it. I haven't met anyone who's not fed up with this whole sorry saga," she said.

Widdecombe is no stranger to controversy. A practising Roman Catholic who left the Church of England in 1993 due to a number of issues with the Church's direction — the ordination of women being the "last straw" — her religious views have strongly informed her politics, including opposition to abortion and various LGBT rights issues, and support for the reintroduction of the death penalty and retention of blasphemy laws.

She has never married or had any children, and in 2007 she described how a journalist once produced a profile on her claiming she'd had at least "one sexual relationship", to which Widdecombe replied, "be careful, that's the way you get sued". However, she confirmed in January 2018 on UK reality show Big Brother she'd had a three-year romance while at the University of Oxford, but ended the relationship in order to prioritise her career.

​In 1990, following the assassination of Conservative politician Ian Gow by the Provisional Irish Republican Army (IRA) and the Liberal Democrats winning his former Commons seat of Eastbourne in a by-election, she remarked that the IRA would be "toasting their success".

In 1996, while Prisons Minister she defended shackling pregnant female prisoners when in hospital receiving antenatal care. She told the Commons the restrictions were needed to prevent prisoners from escaping.

"Some MPs may like to think that a pregnant woman would not or could not escape. Unfortunately this is not true. The fact is that hospitals are not secure places in which to keep prisoners, and since 1990, 20 women have escaped from hospitals," she argued.

In 1997, during the Conservative leadership election, Widdecombe spoke out against candidate Michael Howard, under whom she'd served when he was Home Secretary, telling the House of Commons there was "something of the night" about him — a remark some considered to be anti-Semitic.

​Widdecombe is nonetheless a renowned ailurophile, or cat lover, her personal website boasting a dedicated section on the pet cats she's owned over the course of her life.