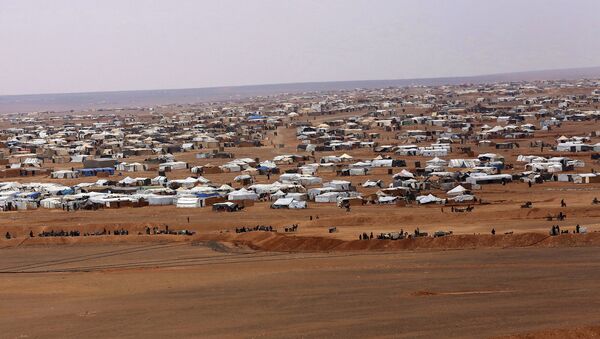 UNITED NATIONS (Sputnik) – The United Nations for the first time gained access to shelters at Syria's Rukban refugee camp and called for a third humanitarian aid delivery after assessing the situation there, UN Assistant Secretary-General for Humanitarian Affairs Ursula Mueller said during a UNSC meeting on Wednesday.

“Today our teams accessed the shelters for the first time,” Mueller said. “The deployment of a third humanitarian convoy to Rukban remains urgent – to avoid the deaths of more children.”

Mueller, who is a Deputy Emergency Relief Coordinator, said Syrian authorities have so far refused to grant the United Nations permission to arrange another humanitarian aid delivery to the camp.

“The UN has requested access to provide life-saving assistance, but on Monday was informed by the authorities that such a convoy would not be possible,” she said. “We continue to advocate for full, unimpeded and sustained access to shelters, as well as areas of origin and destination, and to people en route, to adequately support the humanitarian needs of those leaving Rukban.”

Russian Military Urges US to Enter Talks on Dismantling Syria's Rukban Camp
The Rukban refugee camp lies in the US-controlled zone around its military base in At-Tanf, making it hard for humanitarian workers to access. The UN has only been able to organize two humanitarian convoys to Rukban since November 2018.

During the most recent delivery in February, the United Nations interviewed the camp's residents, 95 percent of whom said they want to leave the shelters to return home, according to the UN Office for the Coordination of Humanitarian Affairs (OCHA).

Syria along with Russia have repeatedly called on the United States to allow refugees who want to leave the camp to do so and have opposed aid deliveries as short-term solutions to the problem. They have set up humanitarian corridors for refugees to leave and have organized evacuations.

Ursula Mueller also noted that about 2,000 people had left Rukban camp on Tuesday.

"As you may know, over 7,000 people have left the site in recent weeks, including nearly 2,000 just yesterday," Mueller said on Wednesday. "Those who already left organized their own transportation to the 55km border area, from where they have been transported to four collective shelters in Homs governorate through a combination of private and government vehicles."

Mueller said many of the people are leaving the shelters quickly in order to stay with their relatives in towns in the Eastern Homs governorate, while some remain in the shelters longer to fix their status with the authorities.

"Colleagues in Damascus have reiterated the United Nations' willingness to be directly involved to ensure that core protection standards are met and movements are conducted in a voluntary, safe, well-informed and dignified manner," Mueller said. "Today our teams accessed the shelters for the first time. The United Nations is ready to engage further, but we must be fully engaged, from start to finish. We continue to advocate for full, unimpeded and sustained access to shelters, as well as areas of origin and destination, and to people en route, to adequately support the humanitarian needs of those leaving Rukban."

Russia, Syria: US ‘Trying to Hide Crimes Against Civilians’ at Rukban Camp
The Rukban refugee camp is located in a zone controlled by the United States around its base at At-Tanf. The Russian and Syrian militaries have said the situation in the camp, which hosts more than 40,000 internally displaced people, is nearing a humanitarian catastrophe.

Both Syria and Russia have repeatedly called on the United States to allow refugees who want to leave the camp to do so and set up humanitarian corridors to facilitate their return.

In January this year, the World Health Organization (WHO) described people residing in the camp as "trapped," adding that they live "in deplorable conditions."

Limited water supply, bitterly cold weather and poorly functioning health care facilities contribute to the rise of diseases, which include influenza, measles, tuberculosis and chronic respiratory diseases, the WHO stated.