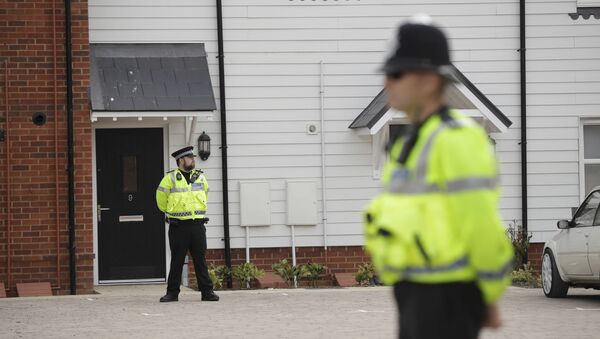 Earlier, Met Police received an allegation of a hate crime on Golders Green Road in the northern London borough of Barnet on April 24. The incident was reported to the police by Joseph Cassidy, who has been crowdfunding money for a film to raise awareness about modern-day antisemitism.

Police are investigating reports of swastikas etched into the back of a book left on a Jewish Chronicle newspaper stand in Golders Green.

With no arrests made so far, Met Police have confirmed that enquiries are ongoing.

A spokesperson for the Met Police said: “It was reported that a Jewish book was left on a newspaper stand and antisemitic graffiti etched into the back.”

“So I wouldn’t say I was surprised to see this level of hatred, but it definitely shocked and deeply saddened me.” https://t.co/6ysuHutO3O

​Joseph Cassidy claims he had been conducting research in Golders Green on 18 April and left the book version of his crowdfunding appeal in a newspaper stand for about five minutes, with a note saying “please put back after reading”.

“I decided to go back home, and it was while I was waiting for a train that I decided to flick through the book and discovered the swastikas etched in the back,” he said.

Cassidy, who reported the incident to the Met Police, told Jewish News: “I don’t think words can truly describe what I felt."

“I’ve experienced antisemitism throughout my childhood, growing up and going to a school were I was targeted and bullied for being Jewish daily."

“So I wouldn’t say I was surprised to see this level of hatred, but it definitely shocked and it deeply saddened me.”

​Golders Green is known for its large Jewish population as well as for being home to the largest Jewish kosher hub in the United Kingdom, which attracts many Jewish tourists.

The Community Security Trust, which has monitored antisemitism for 35 years and provides security to the UK Jewish community, told The Guardian that  the spread of anti-Semitic incidents in the UK throughout the year, with more than 100 a month, indicated a general atmosphere of intolerance and prejudice.

A reminder on the @SouthernRailUK 8:22 from Brighton to West Worthing that we live in a world where people carve swastikas into the sides of the trains we take to work. @CST_UK pic.twitter.com/tBKQ6fE3BB

​UK Jewish community leaders and politicians have condemned a third successive year with a record number of antisemitic incidents.
Last year, 1,652 incidents, a 16% increase on 2017, were logged by the CST.

Incidents involving social media made up 23% of the total, up from 18% the previous year.
CST cited the most common type of incident as involving verbal antisemitic abuse directed at Jewish people. There were 78 incidents of damage or desecration to Jewish property.

Three-quarters of the total number of incidents were recorded in Greater London and Greater Manchester, home to the two largest Jewish communities in the UK.

Marie van der Zyl, the president of the Board of Deputies of British Jews, said the figures were very worrying for Jews living in the UK. “Overall, the UK remains a happy place for its Jewish community, but this reports shows that there is no room for complacency,” she said.