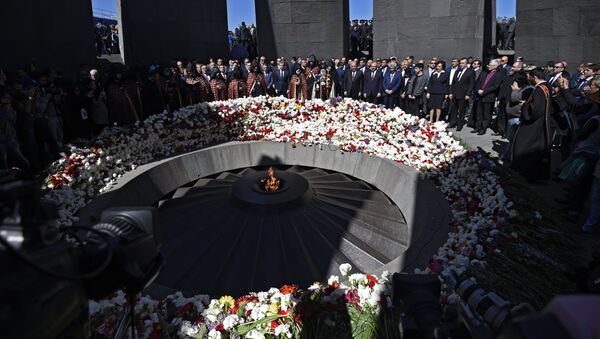 Armenia and Turkey have strained relations due to their different views on WWI history. Armenia says that around 1.2 million of its people were killed or starved to death by the Ottoman Empire during the war. Turkey has repeatedly denied accusations, claiming that the victims of the mass killings were both the Turks and Armenians.

ANKARA (Sputnik) – Turkish President Recep Tayyip Erdogan extended his condolences on Wednesday to the descendants of Armenians who were killed in the Ottoman Empire during World War I, and sent a letter to Aram Atesyan, the general vicar of the Armenian Patriarch of Turkey, in which the president lamented the mass deaths.

The Turkish leader's remarks coincide with Armenian Genocide Remembrance Day, which is marked annually on April 24.

"I remember with respect the Ottoman Armenians who lost their lives under harsh conditions of the First World War and offer my sincere condolences to their grandchildren… I wish Allah’s mercy upon other Ottoman citizens, as well, who died because of epidemics and migrations as well as acts of sedition spearheaded by gangs and armed groups that escalated as a result of the weakening of the state authority,” Erdogan said, as quoted by the president's office.

The president also pointed out that the Armenian community had been contributing to the country’s development since the Ottoman era.

"I especially would like to underline that the peace, security and happiness of the Armenian community in our country are of very special importance to us. We will stand against those who allow even a single Armenian citizen of ours to be alienated or excluded," Erdogan stressed.

According to different estimates, over 1 million Armenians were killed or starved to death by the Ottoman Empire during and after World War I.