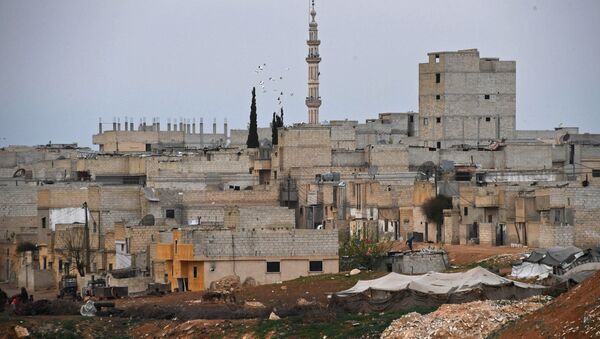 MOSCOW (Sputnik) - Foreign media employees in the Syrian province of Hama conducted a staged filming of the "death" of a family due to alleged use of chemical weapons by the Syrian troops, Maj. Gen. Viktor Kupchishin, head of the Russian Centre for Syrian Reconciliation, said at a briefing Wednesday.

According to Kupchishin, the fighters from the illegal militant groups continue to destabilize the situation in the Idlib de-escalation zone.

"According to information received by the Reconciliation centre, a group of foreign media resources' correspondents conducted a staged filming of the death of a Syrian family from chemical weapons allegedly used by the Syrian government troops in the area of ​​Morek in the Hama province," Kupchishin said.

He also noted that the Russian Centre for Syrian Reconciliation urges leaders of the illegal militant groups to stop provocations and join the efforts in dealing with the situation by peaceful means in territories where they are operating.

Russian MoD: French, Belgian Intel Officers Plan Chemical ‘Provocation’ in Idlib
The Russian Defence Ministry's Centre for Syrian Reconciliation at the time reported that Belgian and French intelligence officers had arrived in Syria's Idlib to stage provocations with the use of chemical substances.

Kupchishin argued at the time that Belgian special services had been filming strikes by Russian Aerospace Forces on terrorist arms depots in order to use that footage to accuse Russia of using of chemical weapons.

The Idlib de-escalation zone now remains the last major stronghold of terrorists and armed rebels in Syria. In September 2018, ceasefire guarantors Russia and Turkey agreed to set up a 9 to 12-mile deep demilitarized zone in the province, which would be cleared of heavy weapons and militants.