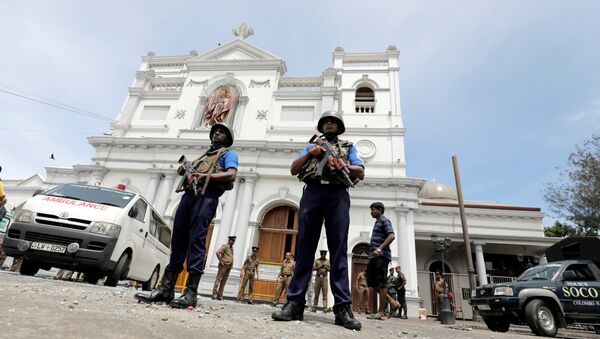 © REUTERS / Dinuka Liyanawatte
Subscribe
MOSCOW (Sputnik) - The Sri Lankan authorities will reimpose a nationwide curfew starting on Wednesday evening and into the early hours of Thursday, as the country continues recovering from the deadly Easter bombings, News 1st reported, citing police. The previous curfew ended in the early hours of Wednesday.

In the meantime, Sri Lankan President Maithripala Sirisena reportedly asked Defence Secretary Hemasiri Fernando and the Inspector General of Police (IGP) Pujith Jayasundara to resign, with Member of Parliament for the Colombo District Wijeyadasa Rajapakshe sending a letter to the president, demanding the arrest of both Fernando and Jayasundara.

After the deadly bombings on Easter Sunday, which left 359 people dead and over 500 injured. Following the attacks, Colombo has launched a massive security operation in the wake of the tragedy, with nearly 60 people detained over their suspected involvement in the deadly bombings.

Daesh* reportedly claimed responsibility for the attacks on Tuesday, though the Sri Lankan investigators suspect the attacks were organised by a local group, Thowheed Jamath, with the help of a vast international network.

Thus, on Wednesday, Sri Lankan State Minister of Defence Ruwan Wijewardena stated the attacks were carried out not by the National Thowheed Jamath (NTJ) terror group, as previously stated, but by a splinter group. According to him, as quoted by the Sri Lankan Ada Derana news outlet, Sunday's attacks were carried out by a splinter group that had split off the NTJ due to internal conflicts and Sri Lankan authorities had not found any evidence linking the NTJ organization to the attacks.

Additionally, the minister said that investigations were underway to identify whether the splinter group had any connections to Daesh. The minister also said that Sri Lankan security forces had uncovered two safe houses of the attackers, both near the capital, in Negombo and Panadura.