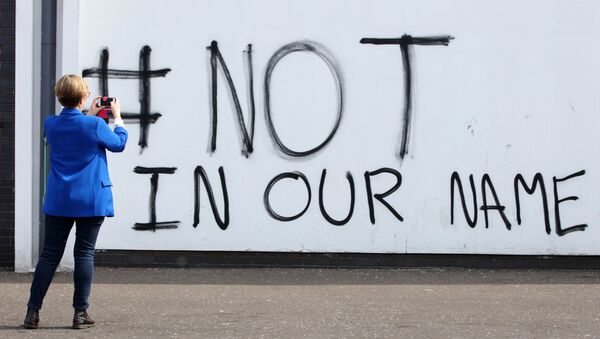 An Irish republican dissident group, Saoradh, is considered to be the political wing of the New IRA, which claimed responsibility for the murder of journalist Lyra McKee in Northern Ireland last week.

Saoradh — the Irish word for liberation — has been the subject of a public backlash following the murder of McKee, 29, who was shot dead on Thursday, 18 April as she stood next to a police Land Rover on the Creggan estate in Londonderry.

​Saoradh, which denies being the political wing of the New IRA, said on Friday, 19 April, "heavily armed" police had gone in to the Creggan "to attack republicans".

A march by Saoradh in Dublin on Saturday, 20 April, was met with widespread scorn and on Monday, 22 April, dozens of McKee's friends and supporters turned up at Saoradh's headquarters in Derry and daubed a mural with red handprints, signifying that the organisation had the journalist's blood on its hands.

​On Wednesday, 24 April, Saoradh spokesman Paddy Gallagher confirmed their accounts had been suspended by both Facebook and Twitter.

"We have clear Terms of Service in place which we enforce when violations are identified," said Twitter.

​Earlier in the week the New IRA "offer our full and sincere apologies to the partner, family and friends of Lyra McKee for her death" in a statement to The Irish News.

About 3,500 people were killed during "The Troubles" and the reaction of the Catholic community in particular following McKee's murder has shown how little appetite there is for a resumption of the conflict.

The Provisional IRA called a final ceasefire in 1997 and announced an end to its armed campaign in 2005, but several dissident republican groups have continued to carry out actions in an effort to achieve a united Ireland by military methods.

McKee's funeral was held at St Anne's Cathedral in Belfast and was attended by both the UK Prime Minister Theresa May and the leader of the opposition Labour Party, Jeremy Corbyn, as well as leaders of all the main Protestant and Catholic parties in Northern Ireland.