Up to 20,000 Extremists Enter EU Annually Under Guise of Refugees - Russia's GRU 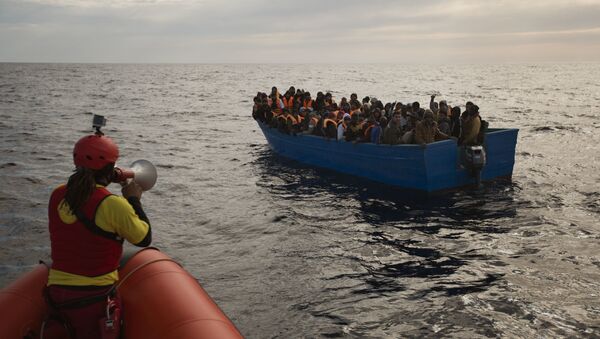 According to a report by the Frontex border agency, the number of illegal border crossings reached its lowest level in five years, but migratory pressure remained relatively high at the EU's external borders. The Western Mediterranean became the most frequently used route into Europe, the report says.

Recently the European Parliament and the Council of the European Union agreed to strengthen the European Border and Coast Guard Agency (Frontex) by setting up a new standing corps of 10,000 staff in order to secure EU borders.

The forces will be tasked with carrying out border control upon a request from EU member states and with fighting cross-border crime. It will also include a rapid reaction unit for urgent tasks. These reforms will enable Frontex to support return procedures by identifying non-EU nationals illegally staying in EU states.

European countries have been experiencing a severe migration crisis since 2015 due to an influx of thousands of migrants and refugees fleeing the Middle East and North Africa.

According to Maj. Gen. Sergey Kovalyov, the overthrow of former Libyan leader Muammar Gaddafi undermined the situation in the whole of Africa and turned Libya into one of the epicenters of global instability.

"The West-backed overthrow of the Gaddafi regime resulted in tectonic shifts in the entire security system on the African continent. Former Jamahiriya [Gaddafi's Libya], which had served as the backbone of regional stability before the foreign interference, turned into one of the main countries for the transit of migrants, weapons and drugs," Kovalyov said on the sidelines of the Moscow Conference on International Security.

He pointed out that, according to UN data, up to 1.5 million Libyans are in dire need of humanitarian aid, 220,000 of whom are internally displaced.