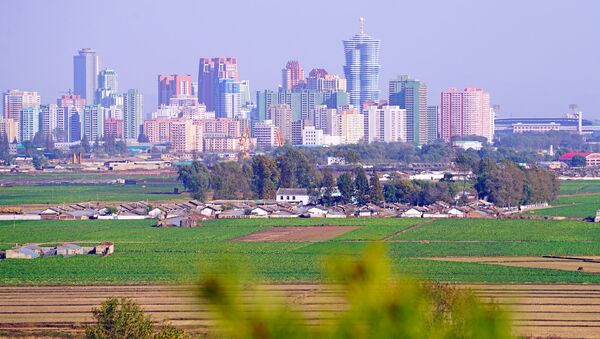 As the Democratic People’s Republic of Korea (DPRK) struggles to cope with economic sanctions, relief is increasingly coming from across the southern border, as South Korean farmers and doctors rally to help those in the North.

Farmers from South Korea's North Jeolla Province, in the country's southwest, are protesting trade sanctions on the socialist DPRK that prevent them from sending material aid to farmers there. A collective of farmers and civic groups converged on the provincial office in Jeonju on Tuesday to demand the sanctions be lifted and that such cross-border relationships as trade at the DPRK's Kaesong Industrial Complex and tourism to Mt. Kumgang be allowed to resume according to the Panmunjom Declaration made last April, reported the South Korean daily Hankyoreh.

In a statement at the protest, the group announced it plans to drive 30 tractors to the US embassy in Seoul on Friday to present the demands. Saturday is the first anniversary of the Panmunjom Declaration, a historic agreement between the two Koreas to cooperate on ending the 69-year-long Korean War and redevelop ties between the two countries that have degraded in recent years. Huge progress has been made in that field, including a September end-of-war declaration by North Korean leader Kim Jong Un and South Korean President Moon Jae In and the opening of cross-border travel.

However, the breakdown of negotiations between Kim and US President Donald Trump on February 28 saw some of those links temporarily undone by Pyongyang in protest. For example, the North only reopened a joint liaison office in Kaesong a month ago, Sputnik reported.

South Korea's Maeil Business Newspaper reported last week that 98.2 percent of South Korean companies that did business in Kaesong Industrial Park would return if it resumed operations, which ceased in February 2016 after Seoul pulled out in protest over North Korean weapons tests.

An official from the Korea Federation of Small and Medium Businesses told Maeil on April 16 that former Kaesong tenants are pressing Seoul to both hasten the reopening of the complex and to subsidize their restarting operations there, saying that business in the North is better than in the South's flagging economy.

South Korean national public broadcaster KBS World Radio reported on Tuesday that the Eugene Bell Foundation, a South Korean NGO, had sent a 16-member delegation of aid workers across the border to treat multidrug-resistant tuberculosis in DPRK. The aid workers will spend three weeks there, also helping to set up self-assembly wards and provide materials to Northern hospitals.

Meanwhile, Pyongyang has been seeking aid through more diplomatic channels, too. Earlier this year, North Korean diplomats pressed the United Nations for food aid, with the international body issuing an alarming report on the status of agriculture in DPRK following a series of natural disasters. Tapan Mishra, the UN's resident coordinator, said in March the mission to DPRK urgently needed $120 million to combat malnourishment resulting from shrinking food rations, Sputnik reported.

Mishra's report pointed the finger at UN sanctions on the country, noting that while they technically exempt humanitarian activities, "life-saving programs continue to face serious challenges and delays… While unintended consequences of sanctions persist, these delays have a real and tangible impact on the aid that we are able to provide to people who desperately need it. We must collectively fulfil our commitment under the Sustainable Development Goals to ‘leave no one behind.'"

North Korean diplomats have also sought to convince other nations to send food aid, with an undated Korean-language memo obtained by NK News last week heavily suggesting that appeals were being made to members of the Association of Southeast Asian Nations (ASEAN).

While the note says Pyongyang will "strive to ensure food security by concentrating its efforts on farming to increase the output of early-ripening crops and the production of basic crops for the immediate future," it makes clear that food aid is needed "urgently" and says whatever plans diplomats made "must be realized during April," NK News reported.

The UN Food and Agriculture Organization warned in February, "There is a food gap of about 1.4 million tons expected for 2019, and that's crops including rice, wheat, potato and soybeans," UN spokesperson Stephane Dujarric said, Sputnik reported, noting that crop yields were expected to be 10 percent less than last year.

Kim recently arrived in the Russian city of Vladivostok to meet with Russian President Vladimir Putin, and is expected to appeal for food aid. AP reported Kim will also press Putin to take a stronger stance against UN economic sanctions on DPRK.

Moscow has already sent 2,092 tons of wheat this year via the World Food Program, according to Korea Central News Agency.