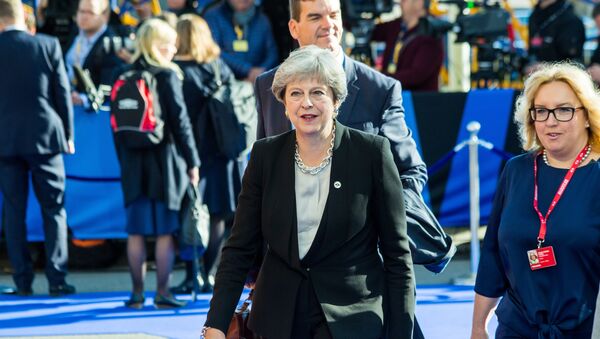 LONDON, (Sputnik) - A potential “grassroots” revolt against the leadership of UK Prime Minister Theresa May from within her Conservative Party is largely due to her own inability to secure an effective exit from the European Union, Diane James, the European Parliament member for the Brexit Party, told Sputnik.

"How much more can we use the metaphor 'writing on the wall' before she [May] realizes her position is simply untenable? She is absolutely 100 percent to blame for the fact that Brexit has not happened and also she's reneged on all of her pledges and promises, so the Conservative party is going to take a hammering in terms of loss of support in the European elections," James said.

Speaking about the upcoming local elections in the United Kingdom, scheduled for May 2, the lawmaker stressed that all of the forecasts pointed at "an abysmal performance" by the Conservative party, and "the blame for that lies firmly at her [May's] door."

"She has fundamentally let down voters, activists and such within her own party to such an extent that realistically she just cannot carry on. The Conservative party membership and various associations have just recognised that enough is enough. They can't keep on doing what they're supposed to be doing if they have a leader that, quite frankly, no one wants to see carry on in the role of prime minister," James underlined.

UK media reported earlier on Tuesday that the Conservative backbenchers in the UK parliament would issue an ultimatum to May, saying that she should either name the date of her departure until June 12 or face the prospect of being unseated.

A survey of Conservative Party members for ConservativeHome website, published on April 21, found that 62 percent intended to vote for Nigel Farage’s Brexit Party if the elections to the European Parliament took place in the United Kingdom in May as expected. Only 23 percent were planning to vote for their own party.

May's leadership has been called into question after the prime minister’s repeated failed attempts to push the Brexit deal through parliament. May has already announced that she would not lead the party in the 2022 general election.