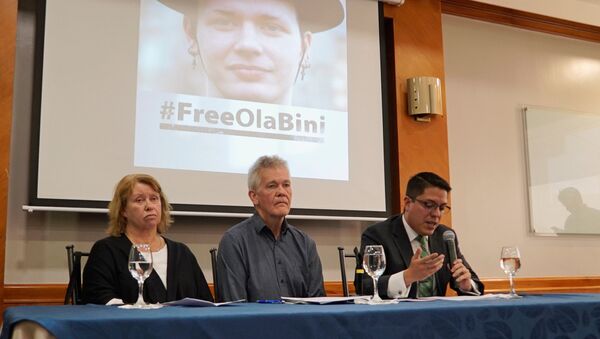 Swedish programmer and data privacy activist Ola Bini has been detained in Ecuador, following the arrest of Wikileaks founder Julian Assange in London.

A number of celebrities, activists, politicians and artists have signed an open letter calling on the Swedish authorities to assist in the release of Swedish developer Ola Bini from Eduadorian custody after he was detained on charges related to endangering Ecuador's national security.

"Ola was detained at Quito airport on 11 April and prevented from boarding a plane to Japan. His basic rights were denied: he was not informed of the accusations against him, nor was he provided translation into his native language, Swedish, and he was kept in illegal custody without the ability to communicate with the Swedish consul, in flagrant disregard of Ecuador's constitution," the letter published by the Swedish daily Aftonbladet said.

READ MORE: Assange Put 'Through Hell' as Quito Tried to 'Break Him Down', Ex-Diplomat Says

The signatories called the process "politically motivated" as "fabricated accusations without evidence" were directed against an "innocent man". "There is not a single piece of evidence or testimony against Bini, who is being kept in an Ecuadorian prison, has been denied bail and is left without guarantees of legal certainty."

​Furthermore, Bini was hailed as a respectable cyber-security expert, privacy consultant, free software contributor and advocate of digital rights, who has "never expressed any views that could in any way constitute a threat to the Ecuadorian government".

"As an advocate of and activist for the right to privacy, Ola has visited Julian Assange at Ecuador's Embassy in London on several occasions. But he does not work for Wikileaks, nor has he ever worked for them. Any accusation that he would conspire against the Ecuadorian government and its data network is false and absurd," the letter said.

In conclusion, the signatories said Bini's "ongoing, preventive detention" was as arbitrary and is seen as "an attack against us all", calling on the Swedish government to "act decisively and promptly".

Ecuadorian authorities allege Ola Bini conspired with Wikileaks founder Julian Assange to endanger Ecuador's national security. Assange recently had his asylum cancelled by Ecuador after they accused him of spying and being ungrateful to his hosts. Assange had been residing in the Ecuadorian diplomatic premises for seven years before his arrest on 11 April.

In 2010, the magazine Computerworld named him Sweden's sixth most important software developer. He is a member of various European and international networks for free software and privacy and has participated in high-profile projects, some of which are sponsored by the European Commission. Bini, a Swedish citizen, has been living in Ecuador for several years.