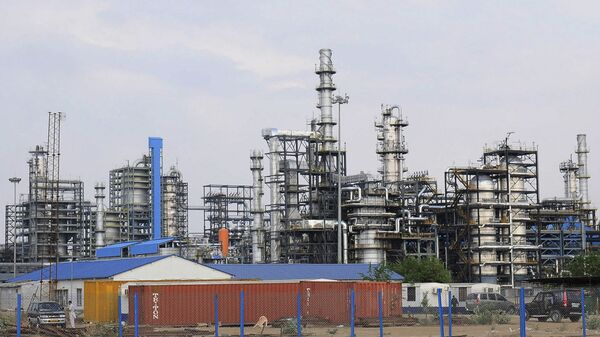 With the US sanctions waiver set to expire in early May, ending oil imports from Iran, India's petroleum ministry is making arrangements to address its supply deficit by calling upon other oil-producing countries to meet the country’s demand for petrol, diesel and other petrochemical products.

New Delhi (Sputnik) — When the waiver on US sanctions, targeting countries which import Iranian oil ends after 1 May, the Indian government has said it will meet its oil demands with supplies from other major oil producing countries and compensate for the loss of Iranian imports.

India Studying Implications of End of US Waivers on Iranian Crude - Source
​The United States on Monday said that it was ending the six-month sanctions waivers that had allowed eight of the biggest Iranian oil buyers, most of them in Asia, to continue to import limited volumes of crude oil.The White House issued a statement announcing US President Donald Trump's decision to not reissue sanctions waivers to countries importing Iranian oil when they expire on 2 May.

"This decision is intended to bring Iran's oil exports to zero, denying the regime its principal source of revenue," White House Press Secretary Sarah Sanders said in a statement.

A media report quoted US Secretary of State Mike Pompeo talking to the media, giving assurances that Saudi Arabia and the United Arab Emirates have agreed to "ensure an appropriate supply (of oil) for the markets" to make up for the loss of Iranian oil globally.

Secretary Pompeo said that prior to the implementation of US sanctions, Iran was generating "as much as $50 billion annually," from oil exports, but that the department estimates that the sanctions have "denied the regime well north of $10 billion".

"How long we remain there — at zero — depends solely on the Islamic Republic (of) Iran's senior leaders," he added.

Secretary Pompeo also said Saudi Arabia and the United Arab Emirates have agreed to "ensure an appropriate supply (of oil) for the markets" to make up for the loss of Iranian oil globally.

The White House announcement comes nearly a year after President Trump announced that the US was withdrawing from the Iran nuclear deal, and unilaterally reinstating comprehensive sanctions against the Islamic Republic and its trade partners.