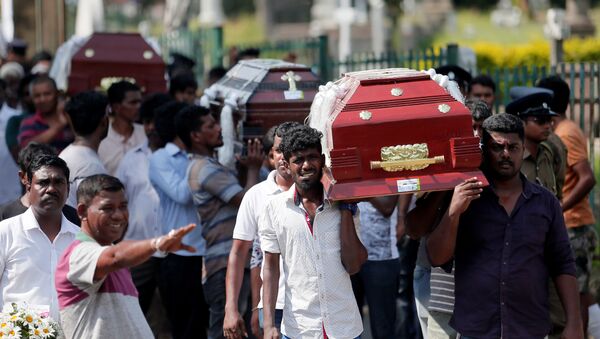 On Sunday, Sri Lanka was hit by a series of coordinated bombing attacks targeting churches and hotels across the country, that claimed lives of at least 321 and wounded about 500 more. The country's defence minister recently stated that the series of blasts was a response to the Christchurch mosque attack in New Zealand, which targeted Muslims.

Sri Lanka's prime minister Ranil Wickremesinghe has warned Tuesday that there could be more explosives, militants "out there" after suicide bombings hit the country on Catholic Easter.

The top official has also addressed the statement made by the terrorist group Daesh* earlier in the day, which has claimed responsibility for the Sri Lanka bombings, saying that he believed they had links to the terrorist group. As he noted, the government's security agencies were monitoring Sri Lankans who had joined Daesh and then returned home.

"We will be following up on IS [Daesh] claims, we believe there may be links," he said.

Speaking further, the prime minister said that there was specific intelligence from India on the attacks. He assumed that some officials might lose their jobs over intelligence failures surrounding the attack. He confirmed there was a prior warning, noting that India's embassy was eyed as a possible target.

At the same time, Reuters reported, citing sources, that the Indian officials had warned the Sri Lankan intelligence services of the Islamist threat hours before the deadly attacks.

Concluding, the official has commented on the possible motive behind the attacks voiced shortly before that by Sri Lankan Minister of Defense and Mass Media Ruwan Wijewardene, who said that investigators believe that the rampage was carried out by local extremists in response to the fatal shootings at two mosques in New Zealand's Christchurch in mid-March. The prime minister has called the version "possible".

Today is a day of national mourning for the victims of Sunday's multiple blasts, that took place in various parts of the country, hitting several churches with Easter holiday worshippers as well as hotels in Colombo and other cities.

Ethnic and religious violence has plagued Sri Lanka for decades, with a 37-year conflict with Tamil rebels followed by an upswing in recent years of clashes between the Buddhist majority and Muslims. Pictured: relatives mourning during a mass funeral pic.twitter.com/hutVha1L3a

WATCH Suspected Suicide Bomber Entering Sri Lankan Church
​Meanwhile, Sri Lankan police have announced that the death toll from the attacks has climbed to 321, and that about 500 more were wounded.

Previously, the country's government had blamed the blasts on a local Islamist group National Thowheed Jamath (NTJ), with Defence Minister Ruwan Wijewardene specifying that the rampage was a response to the Christchurch mosque attack in New Zealand, which targeted Muslims.

The country has remained on high alert since Monday night, when an emergency was declared. Sri Lankan police have detained about 40 suspects in connection to the attack, a spokesman said, adding that this number included a Syrian who was arrested "after the interrogation of local suspects".

*Daesh (also known as IS, ISIS, ISIL) is a terrorist group banned in numerous countries, including Russia