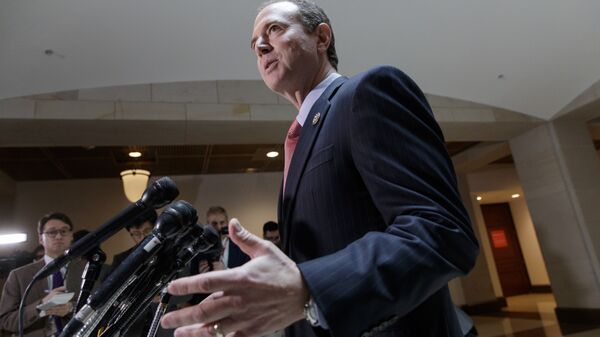 © AP Photo / J. Scott Applewhite
Subscribe
International
India
Africa
House Democrats are preparing their next line of attack against US President Donald Trump, repurposing the Mueller report as a de facto indictment for obstruction of justice and launching new investigations over the weekend. However, they’re also collecting political and financial dividends for resuscitating Russiagate, too, scholars told Sputnik.

On Sunday, Fox News talk show host Mark Levin opined that the Mueller report amounts to an "impeachment report" for the liberal media and House Democrats. Meanwhile, on Monday Trump's lawyers filed a lawsuit in a federal court to stop the Democrat-controlled House Committee on Oversight and Reform from subpoenaing the president's financial records.

That move followed another subpoena issued by the House Judiciary Committee, headed by another Democrat, Jerry Nadler, on Friday against the US Department of Justice for an unredacted version of special counsel Robert Mueller's report on the collusion investigation. Democrats believe Attorney General William Barr's redactions in the report already released omitted key information they could use to continue investigating the president.

This is what Russiagate has become in the spring of 2019: first it was a tragedy, and now it's a farce.

Radio Sputnik's Loud and Clear spoke Monday with Dan Kovalik, a human rights and labor lawyer who is the author of the book "The Plot to Control the World: How the US Spent Billions to Change the Outcome of Elections Around the World," and Jeremy Kuzmarov, a professor of American history whose latest book is "The Russians Are Coming, Again: The First Cold War as Tragedy, the Second as Farce."

​Kovalik said the Democrats' reaction is a "fairly typical, though strange, turn of events," noting that a similar thing happened with former US President Richard Nixon during the Watergate investigation. However, Nixon did commit an actual crime, the investigation of which he obstructed. Trump has not — Mueller's report exonerated him of accusations of collusion with the Russian government (something Moscow has always claimed was the case). "In order for there to be actionable obstruction, it'd be good for there to be an underlying crime! Mueller found there wasn't."

"So, if there's no crime to cover up, then the cover up itself seems, at best, a secondary thing. But, as you say, it's not primary, and why is that? Because the collusion claims have fallen apart," Kovalik said, noting the Democrats are "not interested, by and large, not the leadership of the Democrats, in offering anything to the American people that they need."

Kovalik suggested there were concrete gains for Democratic politicians if they pushed for impeachment. For example: Rep. Adam Schiff, the Democratic knight errant who heads the House Intelligence Committee and once nearly lost his intelligence clearance for leaking details about the Mueller report he thought would hurt Trump, raked in 6.5 times the campaign donations for the 2018 election as he did for the 2016 race.

According to OpenSecrets, the California representative received $968,263 during the two-year electoral campaign leading up to the 2016 elections, before the Russiagate investigation began. However, once Schiff took up the cause of proving collusion and hounding Trump from office, he collected an astounding $6,250,005 to help him get re-elected in 2018.

"I think that while, by and large, the American people don't care about this issue, I think the wealthier donors do care about it," Kovalik told hosts Brian Becker and John Kiriakou. "They're the one who will reward certain Democrats for pushing for impeachment and maybe punish those who don't."

Kuzmarov noted that Russiagate still yields dividends for warmongers "driving forward the new Cold War" with anti-Russian xenophobia, and that it "justifies huge military defense budgets that the Democrats are not opposing."

"A sector of the public is buying into this narrative about the maliciousness of Russia," the history professor warned, noting that media coverage of the report has been "more in the vein of yellow journalism. Some have been extremely sensationalistic."

"As soon as news broke that Trump had been elected President, Russian government officials and prominent Russian businessmen began trying to make inroads into the new administration. They appeared not to have pre-existing contacts and struggled to connect with senior officials around the president-elect. As explained below, those efforts entailed both official contact through the Russian Embassy in the United States and outreaches — sanctioned at high levels of the Russian government — through business rather than political contacts."

"There couldn't have been collusion, since they had no relations of significance with the Trump campaign," Kovalik said, noting the report showed "no misdeeds" by either the Russian government or the Trump campaign and transition team.

"Trump is on the way to getting re-elected because of this," Kuzmarov warned. "I think a lot of people in Middle America who like Trump, or a lot of people are skeptical of the Democratic Party and the media, and this just makes them even more skeptical."