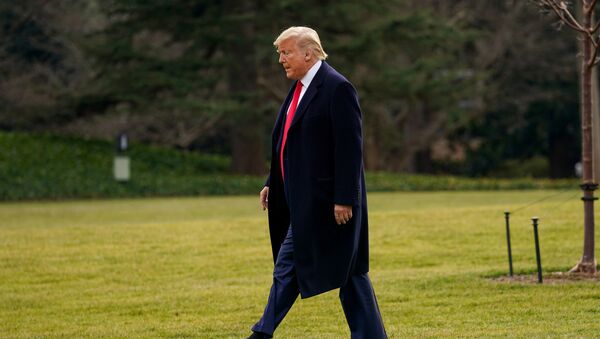 © REUTERS / KEVIN LAMARQUE
Subscribe
Although many Democrats fear that an attempt to unseat Donald Trump could backfire and bolster his support ahead of the 2020 election, some of his most outspoken critics appear to be willing to go down this road.

California Democratic US Senator Kamala Harris, one of the party's top 2020 contenders, said that lawmakers should launch an impeachment process based on the findings of the two-year investigation into the alleged Trump-Russia conspiracy.

"I think we have very good reason to believe that there is an investigation that has been conducted which has produced evidence that tells us that this President and his administration engaged in obstruction of justice," Harris said at a televised town hall in New Hampshire on Monday.

She added "I believe Congress should take the steps towards impeachment."

Harris, however, admitted that the Senate, which is controlled by the GOP, would be reluctant to hear out this idea, making impeachment unlikely. "But that doesn't mean that the (impeachment) process should not take hold," she said.

"I believe that we need to get rid of this President," Harris noted. "That's why I'm running to become president of the United States. That is part of the premise, obviously, of my plan."

"If any other human being in this country had done what's documented in the Mueller Report, they would be arrested and put in jail," she opined, saying that it is up to Congress to kick-start the impeachment process.

Meanwhile, Donald Trump argued that he cannot be impeached because he had not committed a crime warranting impeachment. The US President has repeatedly insisted that there has been no collusion and no obstruction, and insisted that Mueller's findings mean a "complete and total exoneration".

Only high crimes and misdemeanors can lead to impeachment. There were no crimes by me (No Collusion, No Obstruction), so you can’t impeach. It was the Democrats that committed the crimes, not your Republican President! Tables are finally turning on the Witch Hunt!

Special Counsel Mueller's long-awaited report on the Trump campaign's alleged collusion with Russia was released last week. Mueller had found no evidence of collusion, but detailed some instances where the sitting president had attempted to frustrate the investigation. The FBI's former long-time director, however, failed to charge Trump with obstructing justice, indicating that Congress had the authority to carry out the appropriate investigations.