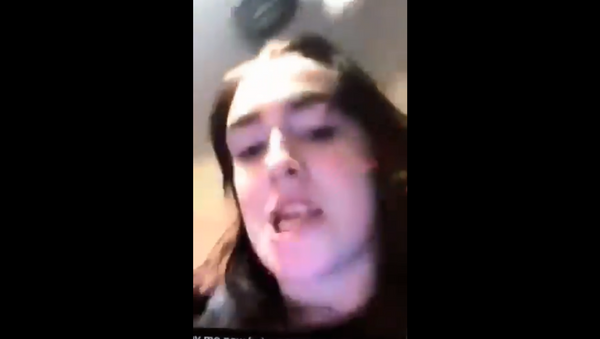 The video was initially shared in a GroupMe chat before being uploaded onto Twitter on April 15 by Maurice Swift, a sophomore and resident assistant at the university. Swift in his post called the act "unacceptable."

"As a minority at Ohio University this make the community feel unwelcomed and unsafe," he wrote. "Something must be done, and our voices must be heard."

The shared footage shows four white students singing "one, two, three, four, how many n***ers are in my store," as one of them flips the camera to count off on each of the other students participating video.

​Within moments of the video being shared on the social media platform, managers of the Ohio University Twitter page released a statement, saying, "We are disappointed that this happened. This behavior contradicts OHIO's values, and the proper departments are looking into this post."

The video is said to be based on a years-old vine post that featured four black individuals at what appeared to be a gas station store. It was reportedly meant to mock a store clerk who was surveilling the group.

Swift has since identified the main student seen in the video as education major Sierra Perkins. An apology statement said to be written by Perkins states that she and her roomates "talked about [the video], and can see how we were in the wrong."

"I'm not saying I wasn't in the wrong. I was and I do apologize. And with that being said, thank you for making me realize that I needed to reevaluate my actions and choice of vines or words," she added.

Dozens of students and administrators have come out to condemn the behavior exhibited in the video. Ohio Student Senate President Maddie Sloat and President-Elect Lydia Ramlo issued a joint statement, calling for disciplinary action to be taken against the offenders.

"In hearing the experiences shared by members of our black community, these actions not only hurt people of color on this campus, but also break down the Bobcat community we strive to create every day," reads the release.

"This incident demonstrates the need for increased cultural competency at OHIO."

​It's unclear what measures will be taken against the individuals seen in the video.