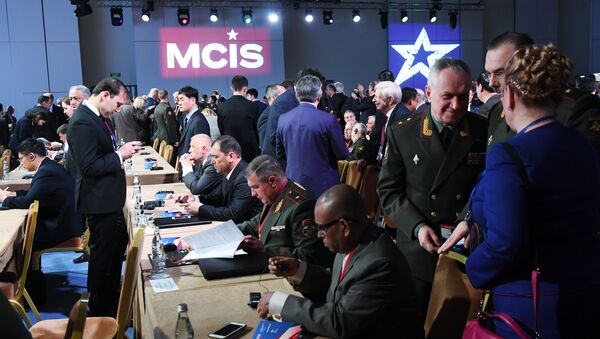 MOSCOW (Sputnik) - The eighth Moscow Conference on International Security (MCIS) will start its three-run day run on Tuesday under the aegis of the Russian Defence Ministry at the Radisson Collection Hotel in the Russian capital.

This year’s edition will be mainly devoted to improvement of arms control systems. The security situation in the Middle East, particularly the Syrian crisis settlement, will also prevail on the agenda of the conference.

Moreover, the conference will focus on the expansion of security cooperation in Asia, Africa and Latin America.

The event will start by a visit to the Russian Defense Ministry’s Patriot Park, located in the Moscow Region. A roundtable on military dangers and threats in modern world will follow.

Middle Eastern issues to be the main topic at Moscow Conference on International Security (23-25 of April 2019) 🚩https://t.co/tEt7WsQ1xK
Weapons and equipment seized from militants in #Syria🇸🇾 to be shown at the Conference🚩https://t.co/b2yIEXahhE

MCIS will officially open on Wednesday, when the Russian leadership and Defence Minister Sergei Shoigu will deliver an opening statement. Russian Foreign Minister Sergey Lavrov is also expected to address the conference.

#Zakharova: On April 24, Sergey #Lavrov will take part in the annual #Moscow Conference on International Security organised by @mod_russia pic.twitter.com/kB7NQiQD3V

Plenary sessions on the second day will cover topics such as Arctic security challenges, "hybrid" warfare and "color" revolutions, the defeat of the Daesh* terrorist group in Syria and Iraq, among other issues.

World
US' Unilateral Exit From INF Worsens International Security Situation - Medvedev
A number of discussions would also be held on Wednesday, covering ballistic missile defense, the suspended Intermediate-Range Nuclear Forces Treaty (INF) between Russia and the United States, terrorism and illegal migration in Northern Africa as well as reconstruction and return of refugees in Syria and Iraq.

The following day, the Russian leadership will deliver opening remarks, while a plenary session on the UN peacekeeping system and legal framework for peacekeeping will be held afterwards.

#Zakharova: On April 24, Sergey #Lavrov is to meet with #OSCE Secretary General @gremingerosce, who will visit #Moscow to attend the 8th Moscow Conference on International Security pic.twitter.com/Vxy6OY4mb7

UN Under-Secretary-General for Peace Operations Jean-Pierre Lacroix and International Committee of the Red Cross (ICRC) Vice-President Gilles Carbonnier will also take part in the event, among many others.

The MCIS is an annual event, which gathers together defense ministers, representatives of international and non-governmental organizations, and military experts. Last year, the conference was attended by some 850 delegates from 95 countries, according to the organizers.

*Daesh (ISIS, ISIL) is a terror group outlawed in Russia and other countries.