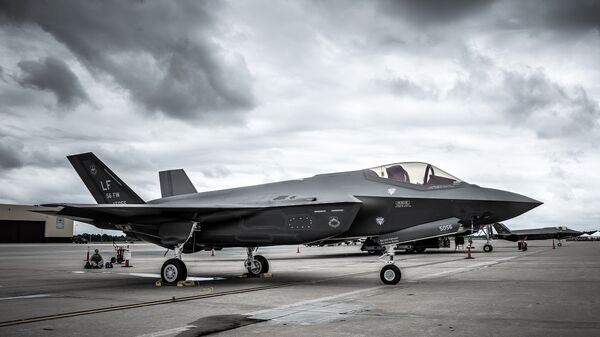 CC BY 2.0 / Heath Cajandig / F-35
Subscribe
International
India
Africa
Apparently, the Pentagon prefers to dole out information about costs of the F-35 program in portions.

Lambasting Lockheed Martin's F-35 multirole fighter for its cost has become almost passé at this point. With its $1.5 trillion price tag, criticizing it is about as fun as kicking a broken, bleeding opponent. Yet it just won't give up: the program cost just keeps rising, with no end in sight.

The thing is, the $1.5 trillion figure is separated into several uneven segments. The actual plane design cost (known as "research, development, test and evaluation") is a humble $55.1 billion. Procurement costs are estimated at $319 billion, which is fair enough, considering warplanes are expensive toys in general. A small $5 billion fraction of the program cost goes to military construction — obviously, one needs facilities for the new plane fleet.

F-21 Combat Aircraft Will Give India Significant Edge - Lockheed Martin
Enter operations and sustainment from 2011 to 2077, a mammoth $1.1238 trillion, estimated in 2015 dollars. Already a big number, it just got bigger — by $73 billion, no less, which is more than the entire cost of research and development. So, now it's $1.196 trillion.

The number comes from the Pentagon's latest Selected Acquisition Report (SAR), an annual cost assessment of major projects, Bloomberg reported Monday. Where does the cost increase come from? Well, for the first time in the plane's history, the Pentagon accounted for the upcoming set of modifications and upgrades that should replace the current "Block 3F" F-35 firmware version with the newer "Block 4" version, with "significantly expanded maritime strike, air-to-ground capabilities and air-to-air lethality," according to the National Interest.

"Ensuring our Block 4 efforts are captured in our acquisition baseline and now in our SAR help us to provide full transparency and status on our F-35 modernization progress," the Pentagon's F-35 program office said in a statement, according to Bloomberg.

Translated into common English, this arguably means the Pentagon withheld the total cost of the project — likely to make the number easier for lawmakers to swallow — not unlike a teenager who tells his dad he crashed the car and then, after dad pops a sedative, adds the information that he crashed it into a De Beers outlet window.

Russia to be Turkey's 'First Choice' if Ankara Ousted From F-35 Project – Report
In similar fashion, the Defense Department rushes to calm down the bewildered reader, saying the program still "remains within all cost, schedule and performance thresholds and continues to make steady progress."

The Pentagon's F-35 program office assures lawmakers it "is committed to the delivery of cost-effective warfighting capability across all areas of the program."

It is unlikely, however, that lawmakers, joined by two of the Pentagon's top brass — who collectively take the role of the enraged dad whose car just got totaled — will let it slide. Both Pentagon acquisition chief Ellen Lord and Acting Defense Secretary Pat Shanahan have previously pushed the program office and Lockheed Martin to reduce the ridiculous projected operations and support costs, and the new increase, coming despite assurances of cost reductions on Lockheed's side, will spark renewed scrutiny, Bloomberg says.

The Pentagon has already cut its procurement plans for 2021 by 17 F-35s, down to only 81 units. According to the SAR, "projected F-35 sustainment outlays based upon given planned fleet growth will strain future service operations and support budgets."

Responding to the call, Lockheed readily stated it "is taking aggressive action to build supply chain capacity, reduce supply chain costs and improve parts availability to help drive sustainment costs down while enhancing readiness," according to an email by company spokeswoman Carolyn Nelson.

One can only imagine how much more expensive the program will become after all that is done, however.