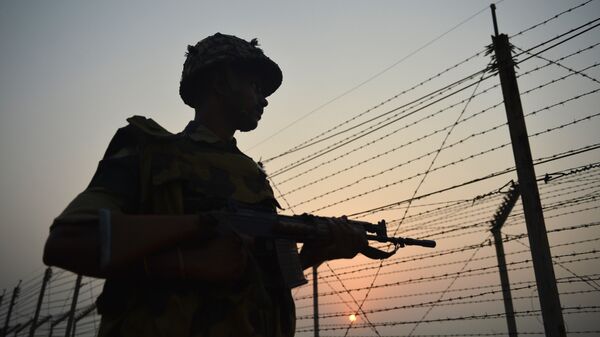 According to the Foreign Ministry's statement, New Delhi now expects the 1267 UN Sanctions Committee, which is a UNSC committee dealing with counter-terrorism, to add Jaish-e-Mohammed leader to its terrorist list.

NEW DELHI (Sputnik) India has shared with China the evidence of terrorist activities of Pakistan-based Jaish-e-Mohammad group and its leader Maulana Masood Azhar, who is believed by New Delhi to be responsible for organising a deadly attack in the Indian state of Jammu and Kashmir in February, the spokesperson for the Indian Foreign Ministry said on Monday.

"We have shared with China all evidences of terrorist activities of Jaish-e-Mohammad and its leader Masood Azhar. It is now for the 1267 Sanctions Committee and other authorized bodies of the U.N. to take a decision on the listing of Masood Azhar. India will continue to pursue all available avenues to ensure that terrorist leaders who are involved in heinous attacks on our citizens are brought to justice," the statement said.

The attack took place on 14 February, when a car carrying over 100 pounds of explosives was detonated on the Jammu-Srinagar highway next to a security convoy in the Pulwama district of the Indian northern Jammu and Kashmir state. Forty-five Indian paramilitary officers were killed. New Delhi named Masood Azhar, residing in Pakistan, as the person responsible for ordering the attack.

Pakistan Supplying Chinese Grenades to Terrorists in Kashmir, Indian Media Says
After the attack, India accused Pakistan of having a "direct hand" in the incident and blamed the neighbouring nation for harbouring and protecting terrorists.

Following the 14 February attack, the United States, the United Kingdom and France drafted a resolution urging the UN Security Council to designate Masood Azhar and his group as terrorists.

Being an ally of Pakistan, China, on its part, put this request on hold noting that Beijing needed more time to examine the issue. China blocked the attempts to impose sanctions on Masood Azhar twice, in 2016 and in 2017.