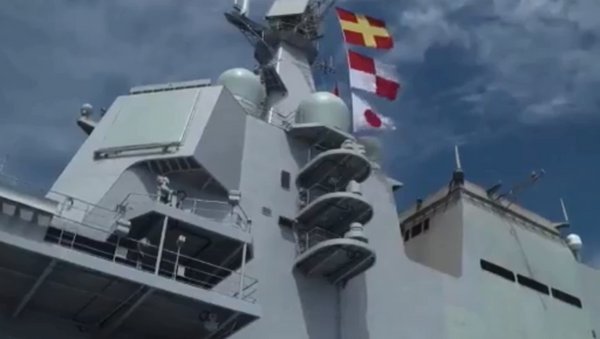 The footage shows the vessel sailing at high speeds as a group of technicians mans the control panels during sea trials. In the clip, the carrier's ski-jump flight deck, bulbous bow and weapons system to counter incoming targets can also be seen.

​From February 27 to March 5 of this year, the warship "underwent full testing and demonstration of its command system and combat capabilities" during sea trials in the Yellow Sea, according to the South China Morning Post, which cited a CCTV report.

The report added that officials have reportedly completed testing for the carrier's docking, power, combat and logistics functions.

But don't expect this carrier to be joining in the country's looming fleet review that's set to take place on Tuesday to mark the People's Liberation Army Navy's (PLA Navy) 70th anniversary. The naval parade will take place in the Yellow Sea off the coast of Shandong province's Qingdao, and will include 32 Chinese warships and 39 aircraft.

China's Deputy Naval Commander Qiu Yanpeng told reporters over the weekend that "the Liaoning aircraft carrier, new nuclear submarines and destroyers, as well as fighter jets and some of the warships will be revealed for the first time" in the parade. He did not specify whether the Type 001A would be joining the event.

"As host of the multinational fleet review, it would be inappropriate for China to send too many warships more than last year's parade of 48 ships in the South China Sea," Li Jie, a Beijing-based naval expert, told the Post.

"The number of warships includes 32 from China plus about 20 from foreign navies, so it's a little bit bigger in scale than last year, but it will be a high-quality, low-profile formation."

Li added that China's officials are focusing on highlighting the "quality of its warships rather than the quantity."

Type 001A, which has yet to be officially named, is expected to become the second aircraft carrier to be included in the PLA Navy once it passes all necessary testing. China's sole carrier at the moment is the Liaoning, a Soviet Kuznetsov-class vessel that China purchased from Ukraine in 1998.