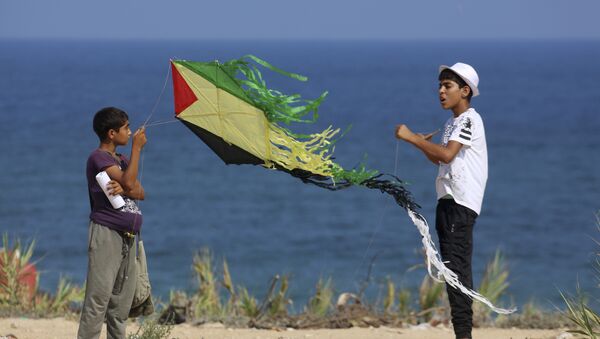 © AP Photo / Adel Hana
Subscribe
In February, Tel Aviv announced that it would withhold millions from monthly tax revenues it collects for the Palestinian Authority, which is said to be compensation for the PA’s payments to prisoners jailed by Israel for violence. With the Palestinians refusing to take the reduced sum, it has brought them to the brink of an economic crisis.

During an emergency meeting of the Arab League in Egypt, called at the behest of the Palestinians, member states have pledged to pay $100 million per month to the Palestinian Authority to offset its shortfalls due to an Israeli decision to cut the tax revenue that Tel Aviv collects for the PA.

Palestinian President Mahmoud Abbas, who has stepped up diplomatic efforts to counter the anticipated peace plan by the Trump administration, called on allied states to help the Palestinians amid what he described as "Israeli intransigence”. He has insisted that a “safety net must be provided”, according to The Times of Israel.

“The Arabs need to be engaging actively at this critical time”, he said, as cited by the Israeli outlet.

Israel announced in February that it will keep $138 million per month from the tax it collects and transfers to the PA under the Oslo peace accords from 1993 and 1995, which tops $1 billion dollars a year, according to Xinhua. The Times of Israel reports, this money makes up half of the Palestinian Authority’s monthly budget. The cuts are meant to offset the Authority’s payments to Palestinians, jailed for terrorism and violence by Israel, and the families of attackers.

The PA have protested the measure and refused to receive any funds gathered by Israel until Tel Aviv pays it in full. As a result, many PA employees’ salaries were chopped in half in March. On top of that, the World Bank recently warned of an economic crisis, if an agreement is not concluded.

Abbas insisted that Israel rejected his offer to discuss the dispute together with the US.

“We have been paying salaries to the families of prisoners, martyrs, and wounded Palestinians since 1965. It is our duty to care for their families”, he said as cited by The Jerusalem Post.

Bethlehem University’s Professor Mazin Qumsiyeh told Sputnik that he doubts the financial help from the Arab League to the Palestinians, who are struggling to cope with Israeli tax cuts, dubbing it “Band-Aids on a severed main artery”. According to the scholar, the roots of the problem go back to the Oslo negotiations that laid the basis for the current situation.  He noted that the Palestine Liberation Organisation’s (PLO) leadership thought that self-government was going to be an interim 5-year arrangement leading to statehood, dubbing this stance “naive at best and complicit at worst”.

But over the years, a transition to a Palestinian state did not happen, while the situation in the territories has deteriorated significantly. Qumsiyeh pointed out that “this context is important to understand that even [if] the Arab countries do give $100 million a month (which is unlikely since previous pledges were not met), it will do little to correct the structural problem of a captive Vichy economy”.

“What is needed is to dissolve the PA, recreate the PLO and get liberation first. This will happen anyway, because Band-Aids on a severed main artery will not solve the problem in need for radical surgery!” Qumsiyeh said.

Pledging millions to the Palestinians, the Arab League’s foreign ministers in a final declaration denounced any peace plan that does not respect the Palestinian people’s rights, the Turkish outlet Anadolu reports.

They reportedly referred to the highly-anticipated US plan, dubbed the “Deal of the century”, which purportedly will suggest the creation of a Palestinian state in the Gaza Strip. The declaration reportedly concluded that plans that do not grant Palestinians legal rights, will never bring a lasting peace to the region.

A senior Fatah official, however, told Al-Khaleej Online news, cited by The Jerusalem Post, that some Arab states are exercising “immense pressure” on the Palestinians to force them to accept Donald Trump’s “deal of the century”.

“Some Arab countries, especially Saudi Arabia, Egypt and the United Arab Emirates, are very interested in the deal of the century. They are using all means, including political and financial blackmail, to force the Palestinians to accept the deal of the century despite all the dangers it poses to the Palestinian cause”, the source said, noting that the Authority would not submit to any pressure.

000000
Popular comments
One day USrael will be called to account for crimes against humanity and there will be hell to pay.