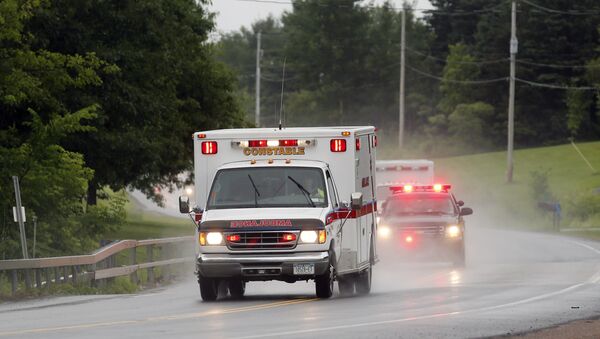 © AP Photo / Mike Groll
Subscribe
A Nebraska man might have had his life saved by poor road maintenance when the ambulance he was riding in struck a pothole last Monday and the jolt fixed his arrhythmic heartbeat.

A 59-year-old man was being rushed to Lakeside Hospital in Omaha on April 15 with a racing heart — WOWT reported it was a 20-minute ride to the clinic, and his heart was racing at 200 beats per minute. He might not have survived the rest of the trip if the emergency vehicle hadn't suddenly hit one of those gigantic potholes we all hate in an extremely violent fashion.

"One way to treat that is with an electrical shock," Nebraska Medicine's Dr. Andrew Goldsweig told WOW about the man's racing heart. "Classically, you'll see it on television. The paddles, 'Clear' and a big jolt. Turns out, you can do that with a pothole."

Gretna Rescue enroute Lakeside Hospital with a patient with a heart rate of over 200 bpm. Gretna now calling them back to advise they struck a large pothole enroute which converted the patients heart to a normal rate! #OmahaScanner

​Pretty handy trick for medical science! However, Goldsweig noted, "It's rare, but it's a well-described phenomenon," mentioning that there was at least one well-documented case from the 1970s when a speed bump jolted a man's heart back into a normal rhythm.

CHI Health emergency physician Dr. Peter Daher, who wasn't involved in the Nebraska man's case, told Omaha.com that the man might've had supraventricular tachycardia, a rapid heart rate that can be caused by a faulty electrical system in the heart, medication, stimulants, excessive caffeine or thyroid disease.

However, hospital officials would not confirm any details of the man's case, including whether or not he'd been discharged.

While Daher mentioned a number of methods patients have used to shock themselves back into normal heart rates, he said, "Just the scare of hitting a pothole probably could have done it, too. I wouldn't doubt that was possible."