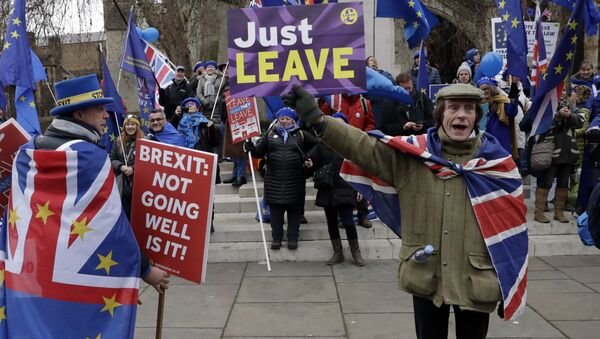 The development comes as pro-Remain Labour MPs are circulating a letter that is urging the party's Brexit negotiating team to agree to a withdrawal deal without insisting on a confirmatory referendum.

Labour cannot defeat Brexit Party leader Nigel Farage if it continues to "sit on the fence" over arguably the most pressing issue the UK has faced for a generation and needs to offer the people more than "mealy-mouthed" support for a second referendum, Tom Watson, the party’s deputy leader penned in The Observer.

Watson continued by warning that the Labour Party would lose to Farage's new Brexit Party in May's European elections if it keeps giving the impression that "we half agree with him".

"Instead we must offer a radical alternative based on our values that speaks directly to the people we represent and demonstrate Labour has a way forward out of the crisis. Labour won’t defeat Farage by being mealy-mouthed and sounding as if we half agree with him. We won’t beat him unless we can inspire the millions crying out for a different direction. We won’t win if we sit on the fence about the most crucial issue facing our country for a generation", he wrote.

Jeremy Corbyn's deputy believes that voters deserve a "confirmatory" referendum and "final say" now that they know more about what Brexit would actually mean.

Corbyn Slams UK Cabinet for 'Dithering' on Brexit Over Coveted US-UK Trade Deal
The comments by Watson come on the heels of last week's opinion polls placing Farage's Brexit Party with 23 percent ahead of Labour (22 percent) and the ruling Conservative Party with 17 percent. The Brexit Party was formed in January after Farage left the UK Independence Party (UKIP) amid disagreements over the party's approach to the UK's pullout from the EU, and was officially launched last week.

In the meantime, Labour chief Jeremy Corbyn has voiced his support for a second referendum in order to "prevent crashing out or leaving on a deal", prompting much concern among remainers in the party.

A letter is circulating among Labour MPs who say that cross-party talks between the Tory government and Labour on a potential soft-Brexit deal, set to resume this week, could fall to pieces if Corbyn and his negotiating team insist on a confirmatory referendum on any agreement.

"A second referendum would without a shadow of a doubt be divisive, but it would almost certainly not be decisive. A narrow victory for Remain would immediately trigger calls for a further ‘best-out-of-three’ vote, and we are far from convinced that a victory for Leave would resolve the matter, either. Our Party is firmly opposed to leaving the EU without a deal, and rightly so. But the fact is that a second referendum which did not have a No Deal option on the ballot paper would be fatally lacking in democratic legitimacy", the letter reportedly reads.

Stephen Kinnock, one of the authors of the letter, said that it's essential to reassure the public that the Labour Party is partaking in the negotiations in "good faith".

"We believe that it would be a mistake if we were to start introducing our own red lines at the very moment that the prime minister appears to be softening hers. Let’s get a cross-party negotiated deal over the line first, and there will of course then be ample opportunity for colleagues who are campaigning for a second referendum to attach a confirmatory vote amendment to the withdrawal agreement implementation bill, should they wish to do so", he said.

However, earlier this month there was another letter to Corbyn, signed by 80 Labour MPs, insisting that the party leader secure a guarantee of a second referendum in any deal he reaches with Theresa May's Tories.

"The only way to guarantee jobs, rights and protections — and Labour's reputation with its membership and the electorate — is to support a confirmatory public vote on any option which is agreed by Parliament, which will put additional pressure on the Government to hold the early general election the country needs. Any compromise deal which is now agreed by Parliament will have no legitimacy if it is not confirmed by the public", the letter read.

EU's Juncker on Brexit: 'We'll Never Kick Out a Member State'
The UK was supposed to finalise its divorce from the European Union on 29 March, but Theresa May's government failed to secure support for its withdrawal agreement before the deadline, which prompted London to request an extension to avoid a no-deal scenario.