What's in a Name? For Some Yugoslavia Bombing Was Operation, For Others a War 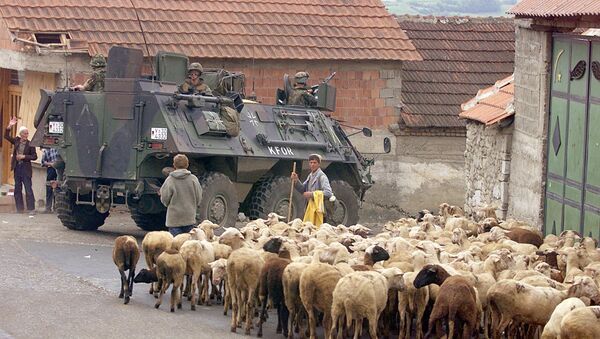 Serbia marked the 20th anniversary of the NATO bombings in March, but even such a long period of “endurance” was not enough for the country to end the disputes about what it really was: an intervention, an aggression, an operation or a war.

Boris Krivokapic, Professor at the Department of Law at Union Nikola Tesla University in Belgrade and a foreign member of the Russian Academy of Sciences, in an interview with Sputnik tried to answer all these questions.

The professor explained that when influential members of the international community attack someone from among less influential representatives, they avoid calling their actions a war, and that's no surprise.

Crime That Won't Be Forgotten: 20th Anniversary of NATO Aggression in Yugoslavia
According to Mr Krivokapic, the sources behind the naming of armed invasions of foreign territories can be found in the history of the perception of war and its legitimacy, experienced by mankind. He recalled that in the past, countries had an unconditional right to wage war.

This right was one of the attributes of their sovereignty, but after World War I this right was limited, while after World War II, not only the use of force was prohibited, but also the threat of its use. The possible instances for the use of force were narrowed down to self-defence and collective measures against an aggressor state, as provided for by the UN Charter.

"This is why 'major players' don't like to call a spade a spade. For them, this is a campaign, an operation… Because if they declare that they have launched a war against anyone they would become the aggressors. Many have already forgotten about it, but the UN is actually a collective security system, an organisation designed to come to the aid of a victim of a aggression. But in the Security Council, which was supposed to deem what was happening as an aggression, the aggressors themselves occupied key seats — three of the five permanent members of the UN Security Council: the United States, France, and the United Kingdom participated in the intervention", Mr Krivokapic reminded.

Back in 1999, he published a book called "NATO aggression against Yugoslavia — power beyond the law" (NATO agresija na Jugoslaviju — sila iznad prava). In it he recalled that in November 1999 he had taken part in a conference on international law in Spain and his colleagues from Western countries, including Americans from Harvard, had acknowledged that the bombing of the Federal Republic of Yugoslavia was an act of aggression.

The expert noted that Yugoslavia 20 years ago could have sought solutions, referring to UN Security Council Resolution 82, adopted in 1950 in relation to the Korean War. It provides for the possibility of transferring Security Council's authority to the General Assembly. The General Assembly could, according to Krivokapic, have taken some measures, but there was no political will.

The professor noted that over the past 20 years a lot has changed for the better for Serbia and the situation continues to evolve:

"We no longer live in a unipolar world with a single centre of power in charge, now the great powers control each other, and this state of affairs is in the interest of the whole world".

How Did NATO's Campaign in Yugoslavia Change the Alliance?
As for the stream of comments that Serbia should actively collect evidence in order to lodge a claim against NATO, Krivokapic, noted that no evidence is needed here: just the fact that NATO began this operation is sufficient evidence of aggression.

"Our people are for the most part skeptical of international law, they wonder, ‘how could this happen to us?' But life in general is unfair. Many things in international relations 'work' well, but there are also instances when the norms of international law are grossly violated, this is exactly what happened to us", the expert said.

A lawsuit against the alliance, according to the professor, is an unrealistic scenario, although in theory Serbia could have filed one with the International Court of Justice.

"The special nature of this court is in the fact that it deals with only claims made by one state against another state, and in order for both parties to start the proceedings, the consent of the party against which the lawsuit is filed is required. That is, we, of course, can file a lawsuit against the United States, but they can say that they do not want to ‘play this game with us'. Another option is to file lawsuits against the states that participated in the bombings in our own courts, but this way we will not achieve any justice and only ruin relations with them. The third possibility is that people can lodge individual complaints with the European Court for Human Rights, but even in this case we most likely will not achieve much success. Only one last option, obviously destined to fail, remains — to file lawsuits against NATO member countries in their courts", Krivokapic concluded.