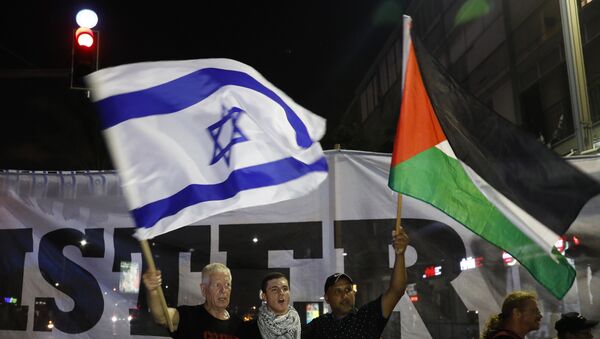 US President Donald Trump has long been promising to present his Deal of the Century plan to achieve a lasting peace that would put an end to the Arab –Israeli conflict, but little details about it are known this far.

In an interview with Sky News Arabic, American Special Representative for International Negotiations Jason Greenblatt has called to ditch the use of the term "two-state solution" in discussions devoted to the resolution of Israeli-Palestinian conflict, arguing that each party to the conflict "sees it differently".

UN Chief Urges Israel, Palestine to Restore Two-State Solution Promise
He also praised the upcoming "Deal of the Century" plan, which has been in the works by the Trump administration for some time and is expected to be made public in June 2019. Greenblatt noted that both the Israeli and Palestinians "will be pleased from some parts [and] not be pleased with some of it".

The US envoy further debunked rumours surrounding the "Deal of the Century", such as giving part of the Egyptian Sinai to Gaza, and urged everyone to wait until the deal is published. He also called on the Palestinians to take a look at it first, before rejecting it, responding to earlier statements by the Palestinian Authority that it wouldn't consider Trump's proposals in light of his decision to move the US Embassy in Israel to Jerusalem.

Hearing reports our plan includes the concept that we will give a portion of Sinai (which is Egypt’s) to Gaza. False! Please don’t believe everything you read. Surprising & sad to see how people who don’t know what’s in the plan make up & spread fake stories.

​President Donald Trump decided to move the US Embassy to Jerusalem in December 2017, despite the fact half of the city is considered by the UN to be a territory occupied by Israel. Both Israel and the Palestinian Authority claim Jerusalem as their capital. Most states have their diplomatic missions to Israel in Tel Aviv, refusing to recognise the holy city as Israeli's capital.

READ MORE: Trump to Netanyahu: 'I Like Two-State Solution' to Israeli-Palestinian Conflict

Trump's decision spurred criticism from the international community, who indicated it might re-ignite tensions between the Arab world and the Jewish state. The opening of the new embassy in Jerusalem sparked heavy clashes on the Gaza border with Israel as a part of the Great March of Return in March 2018. The clashes continued throughout the year leading to hundreds of casualties and thousands of injuries on both sides.