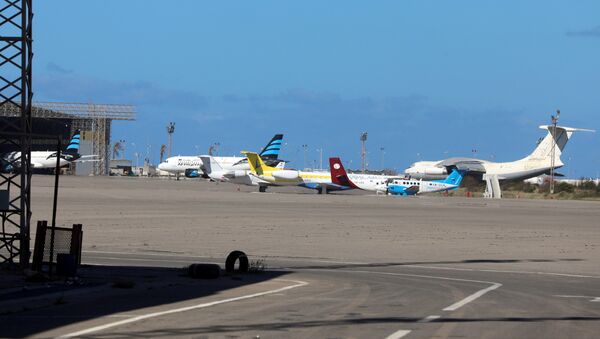 The Libyan civilian aviation authority has closed Tripoli's Mitiga Airport amid residents' reports of an airstrike on the city.

Citing security reasons, Mitiga Airport said on its website on Sunday that the Libyan civilian aviation authority had closed the airport's air space until further notice.

The spokesman of the Libyan National Army (LNA), Ahmed Mismari, said late on Saturday that heavy fighting, involving aviation, was underway in the vicinity of Tripoli. Mismari claimed that forces of the Government of National Accord (GNA) were trying to attack LNA troops in the southern and the eastern suburbs of the Libyan capital.

Africa
UN Security Council Calls for Urgent Resolution on Libya – German Envoy
"The authorities have closed the airspace above the airport over security concerns, until further notice," the Mitiga International Airport wrote on Facebook.

Meanwhile, the statement specified that the territory of the airport had not been subject to any attacks.

"The airplane from Benghazi that was scheduled to arrive to Mitiga today will return tomorrow at 5.30 p.m. [local time, 15:30 GMT]," the airport added.

A strong explosion was reported by witnesses later on Sunday morning in the Libyan capital Tripoli after an aircraft circled for several minutes over the city, according to Reuters.

LNA Commander Khalifa Haftar ordered on April 4 an offensive to retake Tripoli from the GNA forces, referring to the need to clear the city of terrorist forces. As a result, LNA has gained control over the cities of Surman and Garyan, located near Tripoli. Meanwhile, forces loyal to the internationally-recognized GNA promptly announced a counteroffensive.