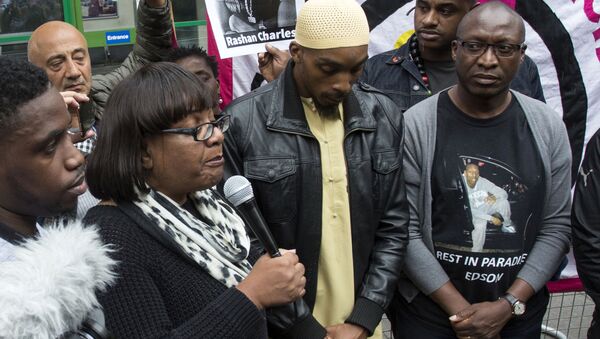 Diane Abbott has landed in hot water after a photo of her drinking what seems to be a mojito on the London Overground emerged. Drinking alcohol on trains and buses is prohibited in the British capital, so some called on Transport for London to fine the shadow home secretary, who is said to be a vocal opponent of cheap alcohol.

One of the Labour Party’s leading figures, Shadow Home Secretary Diane Abbott, posted a message of remorse on Twitter, commenting on a photo of her “drinking from a can of M&S mojito” on an Overground train in London.

A photo of me drinking from a can of M&S mojito on the Overground has been circulated. I'm sincerely sorry for drinking on TFL.

​The scandal around the Labour politician flared up after The Sun published a photo of her sipping from what seems to be a can of 8-percent-strong rum cocktail by the British retailer Marks and Spencer while apparently travelling on a Transport for London train through her constituency in North London.

“She kept her head down and was staring at her phone but kept slurping from the can. It was 1pm, so a bit early to be drinking — especially in public”, one passenger commented as cited by the outlet, while another pointed out that she “was lucky there wasn’t an inspector on board”.

According to a witness, there were “clear signs up in the carriages which say alcohol is banned”.

There’s been an alcohol ban on all public transport, including buses, trains, and tubes in London since 2008. So some called on TfL to fine the 65-year-old MP, insisting she must face the consequences of her behaviour, The Sun reports. Incidentally, Abbott was one of most vocal opponents of cheap alcohol, campaigning to end its sale, the outlet points out.

Many on Twitter also slammed the politician for breaking the rules.

I do hope ⁦@HackneyAbbott⁩ suffers the same fate as lesser mortals, and receives a Fixed Penalty in the post, and doesn’t rely on her political status to evade a fine. Can we confirm she won’t be claiming it on expenses? ⁦⁦@JuliaHB1⁩ ⁦ https://t.co/J3T1ao8CVG

Expect at least a fine or caution for this then @TfL @metpoliceuk?🤔 The law is the law after all, whoever you are, whatever your status. Expect an investigation to be announced?🤔 https://t.co/G0qzqxJ8JW

Diane Abbott is an absolute waste of space. Hope the law gets you pic.twitter.com/z4ccWa1EsI

• I change my views with my hair.

• I send my kids to private schools but criticise you for doing the same.

• I’m the Shadow Home Secretary and I drink on trains. pic.twitter.com/3oRa9lrW2l

​However, many sided with Abbott, feeling this was a relatable situation and even inviting her for a drink.

Come for a drink ❤️🍸🍺🥃🥂🍾 pic.twitter.com/VYWZGYAOD3

Well even if we hadn’t I think now we all should. #MALMO pic.twitter.com/yyfc40Kb3S

I genuinely hope that henceforth 19 April becomes known as Diane Abbott Day and we all celebrate it annually by cracking open a can of M&S mojito on the overground to Stratford.

​Some felt sorry over her particular choice of drink rather than the fact she was drinking in public.