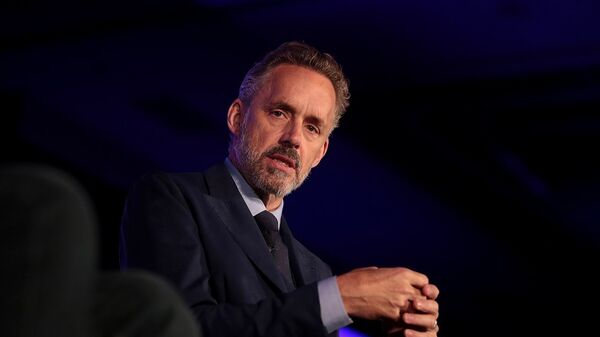 The much-anticipated debate was arranged after Canadian self-help guru Jordan Peterson reacted to an article titled “Why do people find Jordan Peterson so convincing?” by Slovenian philosopher Slavoj Zizek, in which he chastised the professor’s views.

For over two hours, viewers were glued to the screens to see Canadian clinical psychologist and best-selling author Jordan Peterson verbally clash with Slovenian philosopher Slavoj Zizek while debating “Happiness: Capitalism vs. Marxism” at Toronto’s Sony Centre on Friday.

Speaking in front of the sold-out crowd, Peterson opened the intellectual debate night by admitting that he had failed to study all the works by Zizek, who has written three books on Marxism; instead he re-read he called the “original cause of all the trouble” – German philosopher Karl Marx’s  “Communist Manifesto”.

The Canadian professor namely focused on the notion that owners of the means of production were evil, while workers were inherently good, adding that Marx failed to take into account other factors driving the class struggle.

“It’s absolutely foolish that you can make an assumption about someone’s moral worth by their economic standing”, he said.

While acknowledging that capitalism generates inequality, he stressed that it also produces wealth.

As Zizek took the stage, he described their debate as the “duel of the century” and said that they both were “marginalised by the official academic community and supposed to defend here the left liberal line against neo-conservatism”.

“Happiness is a confused notion. The worst thing that can happen is for us to get what we officially desire”, Zizek said, adding that people, in fact, don’t want what they think they do.

The Slovenian professor then said that the global market is regulated in ways that serve some countries while exploiting others, and pointed out the “evils” posed by unrestrained capitalism.

As the debate went on, people stormed social media platforms with all sorts of reactions and memes, with many saying that unlike Peterson, Zizek didn't refer to the Communist Manifesto at all:

jordan peterson as soon as he started reading zizek and realised he didn't understand anything pic.twitter.com/BvB5NzalCz

Zizek will devour you like he devours hot dogspic.twitter.com/VoQHmpsRzo

The Jordan Peterson and Slavoj Zizek debate summed up: pic.twitter.com/hWnlBKZoUo

gets you a man who looks at you the way @jordanbpeterson looks at slavoj zizek pic.twitter.com/EFu8Sio7wB

Many supported Peterson, saying that he seemed to know more about Marxism than Zizek, who has written several books on the matter:

He knows more about Marxism than Zizek it seems

No one understands Zizek because there is nothing to understand. It's all deep and meaningless.

Wonderful discussion Dr. Peterson, you really demonstrated how to properly have healthy discourse with someone who has different views. It seemed like you both came to understand each other better, maybe you can get Slavoj to sit down with you on the Rubin Report 😊 pic.twitter.com/tLaraRzsN9

Peterson, a best-selling University of Toronto clinical psychologist, and Zizek, a Slovenian Hegelian-Marxist critical theorist, the two being intellectual internet celebrities, decided to schedule a debate on the fabric of society after Zizek penned an article for The Independent entitled “Why do people find Jordan Peterson so convincing?” in February 2018.

In response, Peterson challenged Zizek on Twitter, and even though the Slovenian is not on the social media platform, he accepted the challenge.

And, finally, @Slavojiek if you wish to debate the validity of my "apparently" scientific theories — or any of my other claims — then let me know, and we'll arrange it…. https://t.co/Bw8LwyHkC1