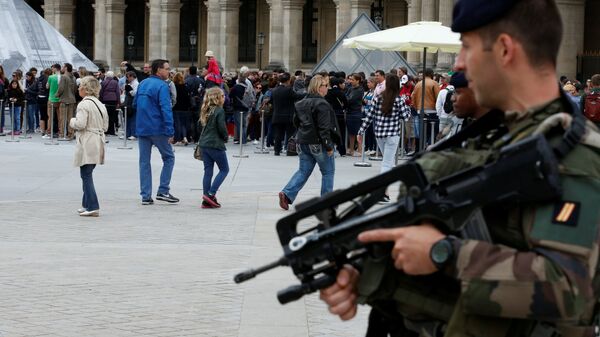 The outgoing European Parliament approved during its last plenary session a deal establishing a €13 billion defence fund that is aimed at boosting the bloc’s defence industry. Sputnik asked Anneke de Laaf, an independent political analyst from the Netherlands, what the main purpose of this move is.

Sputnik: The European Parliament endorsed a provisional agreement reached by co-legislators on the future European Defence Fund (EDF) for the next budget period spanning 2021 to 2027. What is the significance of this agreement?

Anneke de Laaf: When EU President Juncker first announced the creation of the European Defence Fund in his State of the Union speech in 2016, he spoke of an EU in an existential crisis. Remember, this was right after the Brexit vote.

He worried about the lack of unity, the rise of 'populism' and fragmentation, but mostly about Europe's diminishing role on the world stage, in politics, technological innovation and the economy.

EU Parl't Votes to Spend €13 Bln to Create ‘Disruptive’ Tech, New Weapons
He called for a long term vision and a positive agenda on concrete European actions, a.o. for "a Europe that defends at home and abroad": "For European defence to be strong, the European defence industry needs to innovate. That is why we will propose before the end of the year a European Defence Fund, to turbo boost research and innovation."

Now, with this agreement on a long-term budget, this vision can be implemented. The EU shows that it is committed to addressing the issues related to the EDF: technical innovation, EU collaboration and investing in EU technology.

The timing is interesting, right before the election of a new EU Parliament (though this may be a coincidence of course). Should the 'populist' parties win, as Brussels seems to fear, then at least the EDF is safe for the upcoming years.

Sputnik: Can this agreement be viewed as a step of creating a European army?

Anneke de Laaf: Although the announcement does not specifically refer to a European army, Juncker, in his speech in 2016 significantly stated: "The Lisbon Treaty enables those Member States who wish, to pool their defence capabilities in the form of a permanent structured cooperation. I think the time to make use of this possibility is now."

READ MORE: US to Deploy THAAD Interceptors in Romania Despite Moscow's Opposition

The fact that Juncker does not use the term European army illustrates how sensitive this issue is.

EU Parl't Votes to Spend €13 Bln to Create ‘Disruptive’ Tech, New Weapons
NATO-leader USA is not eager to have competition for the European defence budgets. Donald Trump, like his predecessor Barack Obama, pushes member states to pay more to NATO (and spend more on US military equipment). Spending those budgets on a European army instead is not in Washington's interest.

At the same time, the idea of a German and/or French dominated European army brings back memories of war-torn Europe, where various major players fought for dominance for well over 1000 years. The fear amongst the smaller nations is, that such an army would mostly serve German or French interests and not necessarily theirs.

As Juncker rightfully pointed out, the EU is fragmented. The North is different from the South, East from West. With different interests and ideas, a single, unified EU army is likely a bridge too far for now.

But greater cooperation between various players is likely, in fact, this already happens, albeit mostly within the NATO framework at the moment.

Sputnik: EU MEPs recommend allocating 13 billion euros to the development of the EDF.  In your view, what are the monetary distribution priorities? Why these?

Anneke de Laaf: Personally, I would prefer to see defensive technology prioritized. With ever increasing NATO aggression against EU neighbour and fellow European nation the Russian Federation, the chance of something going amiss unfortunately also increases, and I believe it is a government's first priority (and obligation) to defend the citizens.

Macron's European Army Violates States' Sovereignty - French Rally Party
Looking at the proposals (as communicated in a press release on June 2018), the EU will focus on innovation in disruptive technology and drone technology, for example. These are not necessarily defensive in nature, which makes one wonder what the criteria for funding projects will be.

Another related initiative announced in the same press release is the European Peace Facility, which has actually very little to do with peace and is in reality a budgetary tool to cover expenditure for EU contributions to 'peace operations' led by partners that cannot be financed under the EU's budget because of the military and defence implications. The funding for the EPF will amount to € 10.5 billion.

The EDF compliments other EU programmes, such as the Connecting Europe Facility (€6.5 billion) to enhance the EU's strategic transport infrastructures for military mobility. The infrastructure is enhanced on the orders of NATO.

Sputnik: Annegret Kramp-Karrenbauer made a note that Germany and France are working together on a combat aircraft project; she added that the next step is the creation of a joint aircraft carrier. Could we hope for the full technological independence of Europe? If so, when?

Anneke de Laaf: In theory we could hope for full technological independence, there is the required know-how, there is a desire to create new technologies and now extra resources will become available. In reality it is unlikely, though, I think for two reasons.

EU Needs Army to Protect Common European Interests – German Defence Minister
First of all, our world has become so globally interdependent, that it is difficult for any country to become fully technologically independent. Even the USA uses Russian engines for their rockets. And with good international trade relations, there is of course no real need to be fully independent.

Secondly, most EU nations are also NATO members, and it is an unwritten (but publicly enforced) rule that NATO members must buy at least some US military technology. As long as the NATO alliance exists, this will remain a limiting factor.

This does not mean, however, that active cooperation in defence projects amongst EU nations should not be undertaken and encouraged. And the EDF aims to do exactly that.

Sputnik: A group of deputies from the German and French parliaments commenting on the situation said that military cooperation within the EU would not create competition for NATO. If these military blocs are not competing, then what is the difference?

Anneke de Laaf: I believe the idea is that they are complementary. The EU is very careful to always place its own military initiatives within a NATO framework. In the press release of June 2018 for example, they state:

The main features of the European Defence Fund are:

Financing of projects which help make the EU safer and which correspond to priorities agreed by Member States within the framework of the Common Security and Defence Policy and other regional and international organisations such as NATO;

Mr. Juncker in his 2016 speech said: "We should also move towards common military assets, in some cases owned by the EU. And, of course, in full complementarity with NATO."

One gets the impression that they would prefer an independent EU army, but for whatever reason do not dare go it alone without NATO, or go against Washington.

Why Turkey's S-400s Can't Plug In to NATO Defence Systems (and Don't Need to)
Of course, if they did achieve effective EU military cooperation, this would strengthen the EU position within NATO. But with the overwhelmingly superior US military might (at least in numbers and budget), it is difficult to conceive how the EU nations would then be able to force Washington to change its policies. NATO will for the time being remain the dominant military factor. I expect any EU army will mostly be used for 'peace missions' and European projects.

The question is of course, what would the EU or an EU army do, if Washington attacked a vital EU interest, e.g. Nord Stream 2? Do you stand by your NATO partner or do you defend your interests?

I believe it is issues like this which have made the EU contemplate setting up its own army in the first place.

US interests can differ from EU interests, often quite significantly. How willing is Washington to assist the EU when interests diverge? Will it share vital technology? We already know Washington does not share all, even vital intelligence is not always shared. With China becoming the major economic (and increasingly political and strategic) player, Washington's focus is shifting to Asia. And with Donald Trump, our political elite realized they may have to deal with a political leader with ideas very different from their own. Is the USA still the reliable partner it once was (or was thought to be)?

Sputnik: What does the EU's military cooperation focus on?

Anneke de Laaf: One of the ideas behind the EDF is that member states not only develop innovative military technology together, but also buy the products that are the result. Another goal is to save resources through cooperation. And as stated before, developing mutual strategies might also be a focus.

Sputnik: President Trump has repeatedly criticised NATO members for not spending more on the bloc's defence budget. But Europe is increasingly moving in the direction of its own defence bloc and developments. What could this lead to?

NATO Discusses Measures if Russia Violates INF Treaty - Stoltenberg
Anneke de Laaf: Buying EU technology may put the EU in conflict with Washington, which wants its NATO 'partners' to buy US weaponry. We see with Turkey what the reaction might be.

But in this case, it may not come to blows. Remember, the EU plans are all carefully placed within the NATO framework. And additional budgets have been reserved for improvement of the infrastructure to move US troops around Europe and to fund 'peace missions' with 'partners'.

It will ultimately depend on how much money is spent on NATO. In my estimation, the EU will seek to avoid a serious conflict.

Sputnik: What reaction might be expected from US authorities to the EU's steps to strengthen its strategic autonomy?

Anneke de Laaf: I am not sure the EU can strengthen its autonomy, not in a meaningful way. Remember, most member states are also NATO members and this entails specific strategic obligations, as Washington is certain to point out.

Quite frankly, I do not believe Washington would tolerate EU strategic autonomy and would seek to prevent it. What if the EU would wish to sign a strategic cooperation treaty with the Russian Federation, which is a European nation as well as an important EU trading partner? That would be unacceptable to Washington.

The US has various means to make sure the EU would respect its wishes. With economic dependencies and US military bases present all over our continent, the EU cannot afford to ignore them.