Why Brussels Fears Chinese Economic Expansion in the Balkans 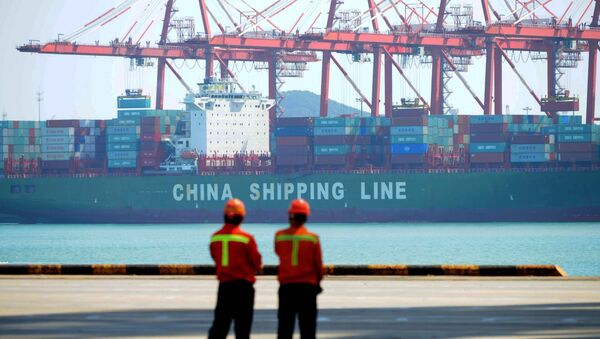 China's activity in Europe, coupled with passive European investors, has led to significant growth in Beijing's presence in the Balkan region.

Mary-Françoise Renard, head of China's Institute for Economic Research at the Centre of Studies and Research in International Development (Cerdi) has told Sputnik what Brussels is so afraid of.

There's Not Been such Large Investment For 40 years

"The strategy of China around the world for the last several years has been to make substantial investments abroad in the most well-known sectors: transport, infrastructure, or energy. Often these projects are associated with the new Silk Road. But sometimes it's hard to say if this is so, but in any case this is part of a multilateralism development strategy, not only in trade, but also in the sphere of investments. Beijing is keen to ‘be present everywhere'", the author of the book "The Economy of China", recently published by La Découverte, Mary-Françoise Renard explained.

READ MORE: Planting Seeds: How China is Setting Up Shop in This Small European Country

"China, by buying the steel plant, saved jobs and is therefore better appreciated than a few years ago in most Balkan countries", Mary-Françoise Renard said.

Serbian President Aleksandar Vucic convinced Beijing to invest in RTB Bor, a copper mine and smelter in 2018, and would like China to invest in the development of advanced technologies.

Belgrade is an EU candidate country, but this does not prevent it from accepting aid from China. Is Brussels losing the fight for spheres of influence in the East?

"It's too early to say. In any case, there is a risk of a split. Hungary and Greece have already voted, unlike other European countries at the UN, so as not to hamper China", the French expert stressed.

China Refutes Claims Belt and Road Plan Aims to Drive Nations Into Debt Trap
Renard recalled that "some Balkan countries would like to return to the EU, which is still their main partner". The EU accounts for 70% of foreign direct investment in Serbia, Bosnia, Montenegro, Northern Macedonia, Albania, and Kosovo. While, according to European Commission data from 2007 to 2016, China's investment amounted to 1%.

Still, Brussels is monitoring the situation very closely. Johannes Hahn, the European Commissioner for Enlargement, in an interview with Agence France-Presse, voiced his "concerns about the possible socio-economic and financial consequences of Chinese investment" in the Balkans. He mentioned "debt diplomacy" and spoke of Chinese investment, which could hamper the "stabilisation and economic development of the Balkan countries". Matt Ferhen, an expert on China at the Carnegie-Tsinghua Global Policy Centre, quoted by the Agency, stressed that the Balkan countries have limited access to European financial markets and "are not in a position to say no to money…".

"China invests in many developing countries, especially in Africa. It tells them: ‘do not worry about short-term loans', providing them at very low interest rates and practically without any conditions, unlike in European countries. But it is not known when China will want to claim this debt. These countries become dependent on China. At any moment, Beijing can say: ‘You must return the money, and if you can't, we will ask for such-and-such instead'. These countries are not major powers and are quite economically and politically vulnerable", Mary-Francoise Renard underlined.

Montenegro alone has seen its public debt rise to 70% of GDP after the country took out a loan of more than 800 million euros from a Chinese bank to build a highway in the mountains.

If Western countries are so worried about China investing in the Balkan region, why are they themselves hesitant to save companies that have found themselves in trouble?

"There are many reasons for that. For example, some of these companies' activity is related to environmental pollution", Mary-Françoise Renard explained. The Chinese are actively developing coal-fired thermal power plants that supply the Balkan countries with electricity, while the European Union is pushing them to switch to more environmentally friendly energy sources. "Another reason is that they believe that some of these enterprises are unprofitable. This saves jobs, but it can be very expensive for China. In Western countries, they came to the conclusion that it is not wise to buy back companies that are in trouble. China's actions are a form of economic diplomacy. There is compensation. Ultimately, this should serve Beijing's political interests. China has a different strategy to that of Western countries", Renard said.

Corruption is also a major concern for Brussels. The Balkan countries are very affected by this phenomenon and the influx of financial resources from Asia raises questions, as Mary-Françoise Renard noted:

"Very often in the Balkans, contract tenders are not transparent. It goes without saying that it is accompanied by corruption. The fears of Europeans are fully justified. The impact on the environment associated with debt risks, corruption caused by instability in society — are all causes for concern in Europe".

The views and opinions expressed by Mary-Françoise Renard are those of the expert and do not necessarily reflect those of Sputnik.